Thank you, Mississippi, for your hate 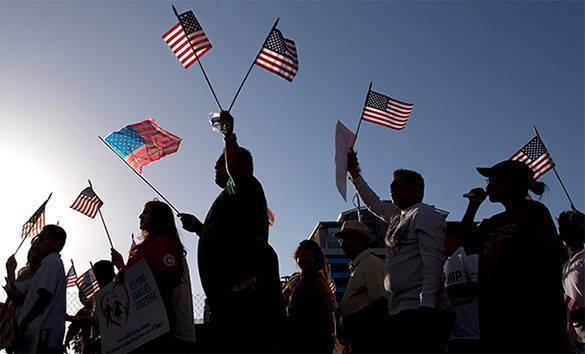 One of the lines in the late, great Phil Ochs's classic song Here's to the State of Mississippi (written during the heyday of the civil rights movement) states that "the speeches of the governor are the ravings of a clown . . ."

Fast forward fifty-two years and it's obvious things haven't changed all that much, as demonstrated by Mississippi governor Phil Bryant's signing of House Bill 1523. Disingenuously disguised as a "religious freedom" law, it actually is, critics contend, nothing more than a blatant license to discriminate.

Naturally, the bulk of this discrimination is allowed against the gay, lesbian, and transgender communities. But this law goes beyond that, basically allowing anyone to cite "religious beliefs" as a reason to discriminate against anybody.

For example, federal law prohibits discrimination based on race. So what can business owners in Mississippi now do? Well, if an African-American or interracial couple enters their establishment, they can refuse service unless this couple can prove they are legally married, that they never had sex prior to their marriage, and/or that neither of them have ever been divorced.

As I said in a previous Pravda.Ru article Is Religion Humanity's Deadliest Invention (July 25, 2014), religion is often the vehicle used by "charlatans, exploiters, hypocrites, demagogues, and opportunists . . . as a way to manipulate, control, and exploit others by preying upon human ignorance. Note I said ignorance, not stupidity. Stupidity is a condition where an individual is incapable, due to a mental or physical malady, of understanding certain concepts, whereas ignorance is created by apathy or credulity that causes people to blindly accept what a so-called 'religious' leader says, instead of questioning and researching the issue themselves."

Naturally, people will argue that this is an invalid analogy. After all, these state legislators and governors are not advocating sexual slavery, beheadings, or other such atrocities.

Yet when, under the guise of "religious freedom," food, shelter, clothing, and medical care can be withheld from children simply because they are being raised by a divorced or single parent, or by a same-sex couple, then is this also not creating suffering, albeit in a more indirect way?

It should come as no surprise that Mississippi has sponsored this brand of hate. After all, this is a state that still celebrates "Confederate History Month," and enshrines the confederate flag onto its state flag. Ochs was indeed prescient when he noted that the calendar in Mississippi "is lying when it reads the present time."

Fortunately, Mississippi's "victory" may be a pyrrhic one. One of the shortcomings of the United States Supreme Court decision recognizing gay marriage was it did not prohibit discrimination against members of the gay, lesbian, and transgender communities in employment, housing, and public accommodations. So, just as Mississippi's hatred, injustices, and violence against African-Americans helped inspire federal civil rights legislation that prohibits racial discrimination in these areas, its hatred and injustices against the gay, lesbian, and transgender communities might finally inspire federal legislation to prohibit discrimination based upon sexual orientation and gender identity as well.

Until that day arrives, I will close with this refrain from Ochs's song-as relevant today as it was over half-a-century ago: "Here's to the land you've torn out the heart of. Mississippi find yourself another country to be part of."