Ave Trump! Those about to die (politically) salute you 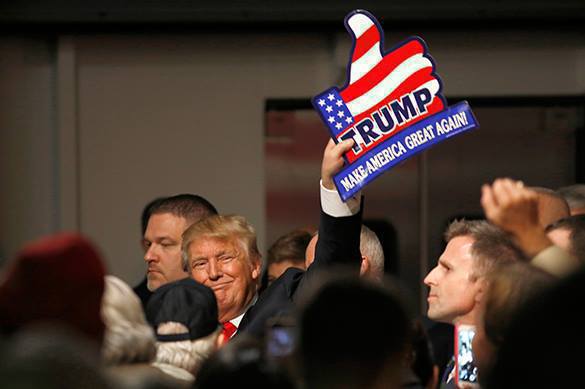 After the symbolic early-bird primaries/caucuses in Iowa, New Hampshire, Nevada and South Carolina, where approximately five percent of either party's nominating delegates were offered to the presidential candidates, the winds of March came early on this 2016 Super Tuesday directly propelled by that extra leap day, February 29.  Approximately a quarter of the delegate count were at stake for each party this March 1, and the results have provided some political enlightenment, as well as minutiae, to keep the politicians concerned, the TV pundits employed and the politicophile public entertained.

As all the voting is tallied and delegates are apportioned, the results become not just a cumulative bottom line for the candidates in the primary season, but also the leading indicator, if read accurately, of future results.

For the two Democratic candidates, Super Tuesday results gave a clean and clear picture: Bernie Sanders appears to have a small but definitive edge where the electorate follows a more diversified, and representative, racial breakdown; while Hillary Clinton wins in landslide proportions where the Black and Brown vote predominate [Alabama, Arkansas, Georgia, Tennessee, and Texas combined to give Clinton 283 (73%) delegates to Sanders 104 (27%)].  It follows that without sharing half of the B&B minority vote, Sanders will only reach the convention in Philadelphia as the standard-bearer of America's progressive cause, but not as the prospective Democratic nominee.  And there appears to be little Bernie Sanders can do to combat a Clinton-loyalty that has been a generation in the making.

The results for the five-candidate slate in the Republican Party also provided a clear, if not clean, picture.  Donald Trump acquired on this date 285 delegates, four more than the combined tally for Ted Cruz, Marco Rubio, John Kasich and Ben Carson.  And that does not augur well for a GOP establishment that continues to find it difficult to sign Donald Trump's adoption papers.

Almost a year ago my journalist friends overseas were email-questioning me on what they were starting to call the American political phenomenon, Trump.  Is he, Donald Trump, some of them were asking, just a boisterous sequel to that other colorful rich man who combined a French-sounding surname with a Texas twang, Ross Perot... back in the 1990's?

Unfortunately, not!  Perot, whether you agreed with him or not, was prophetic in judging both globalization and Bill Clinton; Donald Trump, on the other hand, only appears as an opportunistic, latter-day medicine man and a first-class, self-promoting charlatan, appealing to anger, as proclaimed by the media; but, even more importantly, to the repressed bigotry and worst instincts of an uneducated, power-castrated, and irremediably frustrated, segment of the population... a large segment cutting across the right-left spectrum in American politics.

For this group, who feel to have been demoted economically, politically and socially, Trump represents their alter ego, the person who can say what they won't dare say, but intimately feel, yet not get in trouble; a person with enough power/wealth to be able to command fear, if not respect, from politicians and a media (CNN) that he has lassoed and domesticated for his own end.   It's only logical that this so-called "trump-phenomenon" would take place here first, in the United States of America.  After all, it is here where the two capitalist species, consumerism and globalization, were left totally unrestrained to roam and, sadly, to copulate.  Why then are we so surprised at the guttural roaring of the mutant which resulted, Donald Trump?

No; Donald Trump is no political phenomenon, only a shrill, guttural voice that's coming from that pulpit that the two political parties jointly erected to preach the merits of a global consumer society. Never mind that as a result, through design or ignorance, an entire productive and affluent American middle class was set to rest.  Two political parties under the sequential, and equally misguided leadership of Ronald Reagan, Bush-41, Bill Clinton, Bush-43 and Barack Obama, dug a grave and buried, not just the mythical American Dream, but any hope to turn back.  Don't blame the GOP elite alone for the neoliberal Democratic elite shares equally in the blame.

Housing a large number of major constituencies and one-issue groups in only two political parties is not just a difficult task, but an improbable quest.  The diversity of cultures, ethnicities, races, religions, and plurality of objectives that exist in the US make our society unique... in degree.  In the past, American economic world dominance combined with a reasonable filtered-down income distribution kept much of America (at least, White America) docile to the establishment, the ruling elite. Globalization, however, has decimated the number of living-wage jobs, and thus the standard of living of much of White America, opening Diversity-Pandora's box, letting our worst instincts, prejudices and political ignorance rule the day; best portrayed in our choices at the ballot box, making a mockery of democracy by de facto giving our consent to a government of the powerful, by the powerful, for the powerful that is hell-bent on the rule of a cognoscenti minority that identifies itself as "knowing best" on all issues: economic, social and political.

It's beginning to look as if the gladiator-establishment representing the traditional Grand Old Party, after Super Tuesday's trouncing at the polls, is left with only two options... whichever one they choose needing to be exercised soon. They either accept their primaries' populist victor as destiny's fate, addressing the press with an obligatory political surrender of, "Hail Trump!  Those who are about to die salute you" or, in a last moribund act, these conservative gladiators resolve to take a firm stand and forcefully depose Trump, tagging him as a conniving imposter of sacrosanct conservatism... whether fiscal, social or both.

Whatever the GOP-establishment's choice turns out to be, we can rest assured that this emperor-wannabe, Donald Trump, will not see the same fate as Julius Caesar did on the Ides of March.  By March 16, Donald Trump is likely to be either unofficially anointed as the Republican Party's presidential nominee, or he'll be making plans for an independent presidential run.

Whichever path the Republican establishment follows, it looks as if corrupt politics are alive and well in the US, the Clinton's Political Machine no longer needing extra lubrication in clearing the hurdles of the November election, and Americans' taste of yet another Clinton presidency; Hillary's this time.

Donald Trump is electable as president, but...

Is Donald Trump a Christian? Is the Pope Catholic!