Ebola Virus Disease: What is going on?

The criticism in this column of the World Health Organization's zero or limited responses to international emergencies is well documented, the idea being that this body offers little protection in the event of killer pandemics. The situation surrounding the Ebola outbreak in West Africa is more than strange. What is going on? 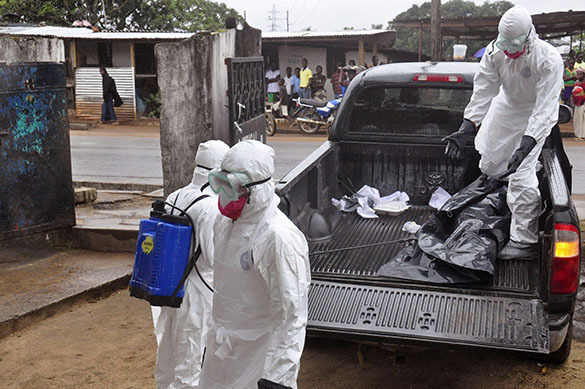 During the Influenza A H1N1 outbreak in 2009/2010, this column criticized the World Health Organization for sitting back and doing nothing except inform us what was happening and how fast the "Swine Flu" pandemic was spreading until it moved from a Phase 1 manifestation to a Phase 6 pandemic. What does the WHO do? It acts like a voyeur.

And once again, predictably, with the Ebola outbreak in West Africa, while the WHO did swing into action eventually moving healthcare workers (who placed their lives at risk to help the victims) and resources into the area, it came too late. The result was the worst Ebola outbreak in history.

The potential to spread was massive, especially because of the lackadaisical attitude of Institutions across the globe and even healthcare facilities in some cases, for instance the Texas Health Presbyterian Hospital, where Patient Zero, Thomas Eric Duncan, had reported ill after travelling from Liberia, and was sent home with a prescription for antibiotics, being diagnosed with a "low-grade common viral disease". Two of the nurses who treated him after he was finally re-admitted, Nina Pham and Amber Vinson, contracted the disease - Union officials allegedly claimed they were dealing with the patient in a terminal phase either with inadequate equipment or were not clearly informed about which protective gear to use.

It has been reported that nurses treating the patient were given the option to use the N95 masks, but some were told full protective gear was not necessary.

In Vinson's case, the hospital isolated her within two hours of reporting the virus. However, before this she had informed the Center for Disease Control about having a temperature and that she had treated a patient with EVD before taking her Frontier Airlines flight to Ohio, and was not prevented from doing so. The fact that she already showed symptoms means she was infectious. Fortunately nobody aboard the aircraft contracted the disease.

EVD is not yet an airborne virus like the Influenza viruses, although it is transmitted by contact with bodily fluids, such as blood, feces and vomit, milk, urine and semen, possibly also saliva and tears, more especially in the later stages of the illness, and from sweat, studies are inconclusive, according to the WHO. However, the information is unclear because the same source, the WHO, states that EVD can be caught from touching contaminated surfaces. Some say that the virus then needs to be passed to mucous membrane through touching the mouth, nose or eyes, others say it can be transmitted through lesions in the skin, while others state that it can be absorbed directly through the skin, in which case it is enough to touch an infected and contagious person.

The Russian Federation has been present fighting this pandemic at all levels. President Vladimir Putin met the WHO Director-General Margaret Chan and has pledged full support. A medical team of Russian virologists, epidemiologists and bacteriologists is in the field in the Republic of Guinea, to date 19 million USD has been provided, alongside humanitarian aid. Russia is ready to send large numbers of doses of the anti-viral drug Triazavirin, which is effective in 70 to 90% of cases of infections with 15 strains of Influenza, including A H1N1 (Swine Flu) and H5N1 (Avian flu), at any stage of the infection.

On January 13, 2016, President Putin announced that Russia has developed a cure for EVD. In December 2015, Anna Popova, the Director of Rospotrebnadzor, declared that the documents for the registration of a vaccine against EVD had been delivered and Russian Health Minister Veronika Skvortsova has declared that the clinical trials of the vaccine revealed a very high degree of efficiency.

A week ago the news was encouraging: the last chain of infection had been halted in the Republic of Guinea since the first chain of transmission in Gueckedou, in late December 2013. A 42-day period without any cases of transmission of this disease was announced. On January 14, the WHO went further and declared "the end the end of the most recent outbreak of Ebola virus disease in Liberia and says all known chains of transmission have been stopped in West Africa" (WHO). In its defense, the WHO did warn against the reappearance of the disease in isolated "flares".

And a few hours later, Sierra Leone health authorities announced the first death from EVD, after the country was declared free from Ebola on November 7.

As predicted in this column time and time again, Ebola Virus Disease has not been defeated in West Africa and any complacency from the WHO or the international community is likely to see another spike of cases. Something is very strange about this outbreak of Ebola Virus Disease.