Russian President Putin: When a fight is inevitable

With the Russian Federation now committed to fight ISIS aggression in Syria, the West though paying President Putin lip service as ostensible tacit support has done everything possible from a covert angle to thwart the Russian successes. Why? The question is rhetorical. We know the answer. 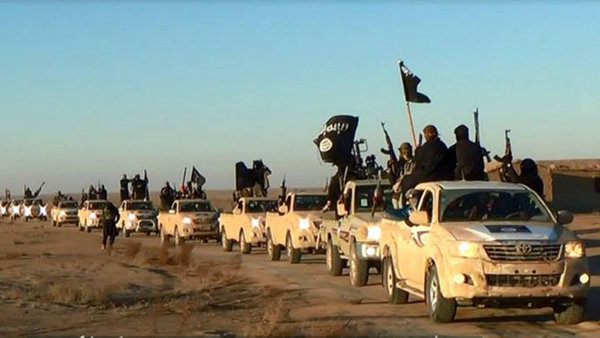 Put another way, the plain truth is in the 'writing on the wall': U.S. hegemonic interests in the Middle East would only improve once the 'ISIS terrorist threat' expanded unto the point of destabilizing the entire region. NATO agrees.

Stooges that they are, NATO forces form the northern flank of the pincher movement that Washington directs. The U.S. further plans its encirclement of Russia. In Europe, Ukraine is the bridgehead. Regarding Ukraine, some pundits in Western media circles have all ready coined the phrase, 'The Frozen War'. They are mistaken. All that is required to light up a fresh Kiev offensive is a subtle shove from the U.S. meddlers. In recent days, we have already seen tell-tale signs. The Donbass region increasingly reports incidents of heavy artillery bombardment from the Kiev aggressors. That fact is a real revelation. The Kiev junta never intended to respect the Minsk Peace Accords.

The U.S. and its coalition partners, Saudi Arabia, Jordan and to a lesser extent the Gulf States all form the southern flank. Syria is pivotal but not key to the American strategy for the region. That's because the Saudis have dialed in tiny Yemen from their big gun sights.

To wit, all of Yemen must first be cleansed of its sovereign Shiite dreams before the Sunni operation can branch out farther afield. The Saudis too are equally committed. Their ruthless rulers plan genocide to rid the Arabian Peninsula of any and all Shiites; by doing so, the House of Saud Sunnis hope to inflict a mortal blow on Iran's sphere of influence, the Saudis avowed enemy. Like Ukraine, the Saudi aggression the scope of which included an air campaign, naval bombardment and a ground invasion has bogged down. At present, their mercenaries are stuck in the desert sands.

Entire credit goes to the fierce Houthi resistance movement that threatens to tighten its grip on the capitol Sanaa. The adroit Houthi fighters also have shown signs of conquering new territory. Their recent incursions have even penetrated the so called impregnable Saudi aggressors' very Kingdom.

No doubt, the resistance's military gains thwarted the Saudi grand scheme: install deposed and still fugitive lapdog President Hadi, back on the sheepskin Yemeni throne. Russia sensed opportunity; their warplanes entered the fray in Syria. By doing so President Putin carved a conspicuous trench in the sand; no regime change in Syria. President Bashar al Assad's democratically elected government would prevail and still preside over the sovereign state.

The irony! Not to their liking, the U.S. and vassal coalition are now trapped in a counter pincer movement. With a Russian installation of the SAM 300 or the more formidable SAM 400 system looming, Syria is a de facto 'no fly' zone. President Putin is resolute when it comes to protecting Russia's assets: military, geo-political and economic; even if that means going to war to save a respected friend. While the West waffled and chose to rely on their media PR inventions which included false flag attacks and downplaying the ISIS terror threat, Russia went to work. Not that they chose war.

No other country had the guts

President Putin entered the breach in Syria because no other country had the guts to seek a 'peaceful' diplomatic solution let alone have the courage to act decisively in the face of terror. Already the Syrian conflict has raged for almost three years. The war's destructive wake, has forced hundreds of thousands of refugees to flee. The majority have set their sights on fortress Europe. Today many of the U.S. vassal NATO gang states find themselves under siege.

President Putin, though he found it distasteful reminded the West of their follies. "Look what you have done! What did you expect would happen!" Moreover, at the time President Putin said, "When a fight is inevitable", his intended audience was not limited to the terrorists. That utterance was in direct response to Washington's continued obfuscations rather than news of U.S. cooperation in fighting ISIS.

The Bard's play, Henry V, best sums the Russian position vis-à-vis their so called Western 'partners' in the war on terror. Young King Harry, leading his army in retreat to Calais responds to Mountjoy, the Frank King's envoy after he warns Harry of the overwhelming might and superiority of the French forces aligned against him. "We would not seek a battle, as we are. Nor, as we are we do not shun it. Go tell your master." You may prefer from 'The Good, the Bad and the Ugly', Tuco's (Eli Wallach) succinct admonition."When you have to shoot, shoot! Don't talk."