The recent diplomatic history of the West has been intrinsically linked with the use of terrorists to topple governments, sowing havoc, committing war crimes while NATO either looked on or else actively involved itself in strafing Government forces while their terrorist minions did the rest. Russia's anti-terrorist operation in Syria is more measured, goes hand in hand with international law and is producing results. 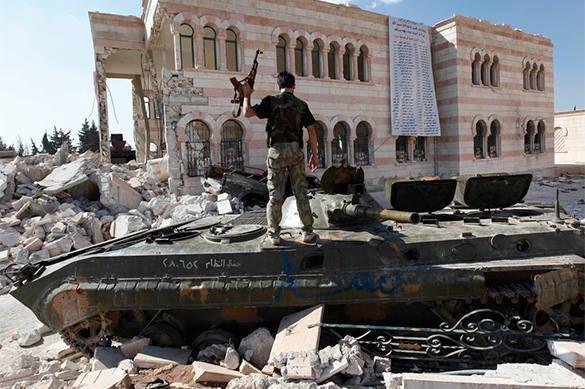 What has the West achieved?

Let us move on to Iraq. What did the West achieve? A foreign policy disaster, where once and for all we saw NATO for what it is, namely the cutting edge of the weapons lobby and the other lobbies which follow an invasion - banking, pharmaceutical, energy, finance, food. We saw military hardware deployed against civilian targets, we saw war crimes, we saw the use of depleted uranium, breaching the Geneva Conventions, we saw hospitals strafed, schools bombed, children had their faces blown off, families had their futures blown away. Hands on hearts, let us all sing God Bless America and its Poodles.

So far, not so good

Meanwhile, the Iraqi State collapsed, and most of the working population is unemployed. The Weapons of Mass Destruction story was a barefaced lie and lo and behold, after several failed experiments, Islamic State grew under the watchful eyes of Washington and its Poodles. So far not so good.

Fast Forward westwards to Libya, the country with the highest Human Development Index in Africa, where hundreds of tribes lived in peace and prosperity in Gaddafi's Jamahiriya. Enter NATO. War crimes, terrorists buzzing around like flies, marauding groups of criminals and murderers slicing the breasts off women in the streets, impaling little boys on stakes, raping little girls before and after beheading them. Helicopter gunships used against the authorities, water supply bombed, electricity grid strafed. Collapse of the State, total chaos, mayhem and Islamic State now controls three cities.

Hardly a good record so far...let us go back East then to Syria.

After supporting terrorist groups, after supplying, arming and aiding terrorist groups, what happened? The equipment fell into the hands of Al-Qaeda in Syria and now worse still, into the hands of Islamic State, which after over a year of bombing by the USA and its Poodles, continued until recently to grow and to push back the heroic Syrian Arab Army of President Bashar al-Assad.

Enter Russia into the fray.

After just over a week, Islamic State is feeling the effect of precision bombing and strafing with missiles as arms depots are surgically removed, Islamic State bases are destroyed and pockets of this vermin are exterminated like cockroaches. The areas infested by this filth are sterilized and the path is cleared for the Syrian Arab Army and its allies to move into the areas and re-establish law and order.

Both the Syrian and the Iranian Governments have expressed in recent days statements claiming that in just over a week, Russia's anti-terrorist operation has provided the means for a diplomatic solution to be achieved, as the country is cleared of the foreign terrorists and as Western-brainwashed Takfiri Jihadi Syrians who had taken up arms are pardoned.

Today, areas of Homs have been cleared of terrorists which have been transported to Syria from dozens of countries, aided and supported by certain Middle East Kingdoms and trained by certain NATO countries, doubtless at the behest of their master, Washington. Large parts of the Golan Heights have also been reclaimed by Government forces following the liquidation of terrorist elements. Meanwhile in Aleppo, the Syrian authorities have sterilized several areas; large numbers of terrorists from Islamic State have been destroyed, equipment has been seized and those who survived scuttled away into the countryside like frightened insects.

Earlier in the day, the terrorist organization al-Nusra Front committed a massacre of civilians in the Square of Ter M'alah.

And what does the West do? It complains about Russia's anti-terrorist operation, complaining that Russia is bombing the "wrong" terrorists, while it refuses to hold talks and then tries to send weapons and supplies to the very groups fighting the Syrian authorities. If that is not interfering in the internal affairs of a sovereign State, if that is not sponsoring terrorism and committing acts of State terrorism, I do not know what is.

I believe, ladies and gentlemen, that we have finally seen that Moscow's foreign policy is coherent, mature, measured, adequate, correct and follows international law. As for the West, I believe the case speaks for itself.