Remember the odious ex-Georgian President, Michael Saakashvili, a convict, who is nowadays wanted in his own country for corruption, money laundering, cruelty, torture and killing his opponents? In May, 2015, with the help of his American friends, he was granted a cozy spot in Odessa, the pearl of Ukraine.  President Poroshenko generously coroneted him as a new Governor of Odessa! Both men first met two decades ago, while studying at Kiev University.  They continued their education in the United States, where they gleefully shaped their hostility towards Russia. 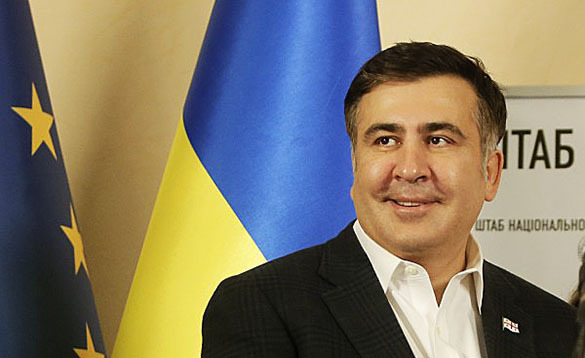 People in Odessa are well known for their original sense of humor. The writers ­Ilf and Petrov were gifted sons of this sunniest portal paradise. They crafted their jocular stories, such as "Twelve Chairs", "Golden Ram" and many more. The fine opus "The Twelve Chairs" was adapted by Mel Brooks, who shamefully forgot to give credit to the original creators (perhaps in hope that the Iron Curtain would forever keep the true authors' identity veiled in the Soviet Union.) Brooks even kept all characters' names unchanged! How lazy and reckless! He is lucky that no one sued him for larceny.

People in Odessa still carry their cheerfulness and contagious optimism, despite a recent, senseless massacre on May 2, 2014.

Before the arrival of a Georgian crook, Mishko Saakashvili, the citizens of Odessa prepared for him a charming reception by hanging countless red ties on the trees to commemorate his tie-chewing habit. When Georgian officials announced that he must go to jail and serve time for bankrupting Georgia, the cornered scoundrel began nervously chewing his tie. That laughable episode was caught on camera.

The mischievous dwellers of Odessa also sent a huge balloon with an Olympic symbol of a bear shedding a tear (Miskha in Russian) saying goodbye, accompanied by a song of Alexandra Pachmutova, who penned the words for the final farewell of the Olympic games in Sochi! It was a priceless arrangement!

Saakashvilii traded his tailored suit for traditional Ukrainian peasant garb, grunting that he gave up $200K a month for a less attractive salary! Question: Was his salary paid by the private funds or our tax money? If the latter, I'm relieved that he is off our back. But I feel sorry for the Odessits!

Mischko had already removed twenty political members who had previously held chairs in Odessa, replacing them with deplorable Georgian individuals wanted in Georgia for various crimes and corruption.

Surprisingly, he recently appointed a Russian former cabinet worker, Maria Gaidar, who was a deputy Governor of Kirov Oblast to Nikita Belykh.  After he lost his chair to another candidate and apparently regained it back, Maria Gaidar teamed up with the Russian opposition movement.

When her former boss, Nikita Belykh, scolded her for giving up her Russian citizenship and relocating to Ukraine, she uttered: "This was my major goal of my entire life and dream come true."  Seriously?

Her great grandfather was a celebrated Soviet author, Arcady Gaidar. He was a beloved Soviet children's icon. His father, Egor, was a writer and a politician, leaning slightly towards the opposition side, but served the Russian government in hard times and remained a true patriot.

Nevertheless, he, Egor Gaidar, like a late Boris Nemtisov, arrived in Belgrade to observe the NATO's shelling of the brotherly country.  What brought them to watch the distraction of Yugoslavia?

Did they take sadistic pleasure watching the gory devastation of a once big country with close ties to Russia or was it a work of NGOs who bribed them with hefty Washington's monetary funds to be agreeable mediators in Yugoslavia?

Now let's return to his daughter, Maria Gaidar, who gladly dumped her Russian identity, to receive a Ukrainian passport to work hand-in-hand with the criminal Saakashvili. Shall I mention that her grandfather, Timur Gaidar, was a respected correspondent to Pravda?

Just recently Maria received a grant from the Russian Federation meant for a scientific research project.  Will her grant stay in RF or will she run away with it?  She must repay every penny!

Most Russian youth grew up reading the books of Arcady Gaidar. This is madness! I cannot even call it a rebellion against her ancestors. She betrayed them all and her own country!  Was it for publicity or due to inner damage?

Another paid provocateur, Ksenya Sobchak, whose father was the Mayor of St. Petersburg and a close personal friend of Vladimir Putin, joined the opposition soon after her father's funeral. Later in life, Mayor Sobchak was ruined politically. Putin brought him back from exile and restored his honor and prestige, while everyone else abandoned him! When former Mayor Sobchack died, Putin gave a heartfelt speech, barely struggling to keep his eyes dry. The widow and her daughter, Ksenya, accompanied Putin, who laid flowers on his grave. Can you explain the paradox of children who betray their fathers? Now Ksenya is a rabid member of the opposition.

Back to Gaidar: When the reporters approached Maria, questioning what do you intend to do as the second fiddle of Mischo Saakashvilii in Ukraine, Gaidar retorted that she will be in charge of democratic policies, initiatives and anti-corruption acts. The reporter probed: "Yes, but you are Russian!" She replied: "So what? We are brotherly countries and we can work with each other." The reporter was like a toothy terrier, nor letting her go: "Can you please clarify with whom Ukraine fights right now?"  According to Poroshenko, he fights against Russia. Where is the logic?

Gaidar was not ready for this blow and lamented: "What do you want from me?"

But today she was merely parroting the same Poroshenko's claims, intensely lying about the war with Russia.

It's just the beginning, Masha. Soon you will learn the Ukrainian language and will hope like the rest of Kiev Junta: 'Kto ne scachet, tot Moscal!' I'm sure you will look fabulous in Ukrainian garb! How long will you live with yourself, knowing your forefathers would have estranged you from their bloodline? Here is a practical advice for you: Change your name and do it now! Stop humiliating your honorable parents! Fate will bite you back!