Enjoy your holidays in Malaysia and Thailand. We are all Rohingya

Rohingya Moslems - persecuted in Myanmar, forced to voyage out on the seas for their own survival and left floating on the currents for months, starving to death as neighboring countries refuse to accept them...now mass graves are discovered in Thailand and Malaysia. 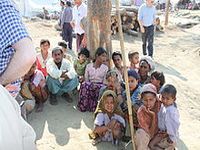 Welcome to Malaysia, truly Asia. Welcome to "Amazing" Thailand. Enjoy your holiday. Not for the Rohingya.

Mass graves of Rohingya migrants have been found inside Malaysia, more specifically near Padang Besar and Wang Kelian in the State of Perlis near the Thai border. Mass graves have also been found in "Amazing" Thailand where "amazing" communities have been working together with the traffickers making money out of the miserable plight of others. Amazing.

The migrants, terrified for their lives after being persecuted in Myanmar, are either forced to flee for their lives taking to sea, where they are left floating for months as their vessels are refused at ports of entry in neighboring countries or else are brought through the Thai jungle where they are bought and sold among groups of traffickers, sometimes aided by entire communities who collaborate and profit from the desperation of the migrants.

The migrants themselves are powerless. Persecuted for decades by Buddhists in Myanmar (so much for Buddhism and peace), they are forced to pay the traffickers to take them southwards to Malaysia through Thailand. 120,000 terrified people fled in the last three years according to the United Nations Organization.

Recently other mass graves, dozens of them, were found in southern Thailand in the provinces of Songkhla and Phang Na, containing strong evidence of remains of Rohingya migrants - skeletons and body parts. Witnesses who survived have spoken of the common practice of massacres and arbitrary killings as money is extorted from the migrants or their families. There are stories of men's penises being stretched with pliers, and pincers being used on the breasts of women.

In 2012 violence flared up (again) in Myanmar as local Buddhists began persecuting the Rohingya Moslems, which Myanmar has since 1982 refused to accept as its citizens, leaving them stateless and as entire communities were torched, women and girls raped and men butchered, hundreds of thousands of people were forced to flee - into the hands of the Thais and Malaysians.

In the horrific camps in these two countries, the terrified Rohingya are tortured and forced to telephone their families, who, hearing their screams, are induced to wire huge sums of money for their release. Those whose families do not pay are butchered; the sick are thrown down the sides of mountains.

Human rights groups have warned of the "enormous" scale of this humanitarian tragedy. Enjoy your holidays in Malaysia, truly Asia and Amazing Thailand.

I for one will not be seen dead in these countries until the Government takes action. The Rohingya do not have that choice.