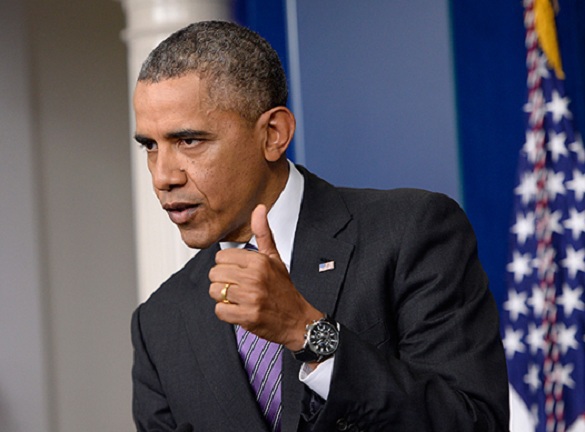 The Bush era, I felt it was much easier to be critical than it is of Obama...

Almost everybody hated or despised Bush Jr., even in America. This is why Bush Number Two was less perilous for global peace and world order than Obama whom we worship. But Obama was re-elected because he allegedly killed Osama (what a paronomasia!), Bush's old Nemesis. And messiah Obama behaved just like another bushman.

Concerning Seymour Hersh and his revelations about the assassination of Bin Laden, I agree with Dr Roberts. There is nothing very serious about that stuff. Hersh looks very imaginative, but his long and blurred storytelling is not really credible for an audience, like that of the Pravda.Ru readers, accustomed to decrypt the incessant lies of the West and its stupid agencies. We know that a global gullible opinion can swallow nowadays any kind of crap, given that this opinion is still more interested in the intellectual remarks and philosophical achievements of Kim Kardashian or Lady Gaga...

Yet as we say in Paris we cannot, "cracher dans la soupe", spit in the soup! And the prestigious Pulitzer Prize acknowledges in his burst of rage the inconsequence, the amateurism and the cowardice of the main newspapers in the West. Here too I must add that a journal or a magazine, for instance in France, is worth nothing: only four millions Euros to buy the once prestigious Nouvel Observateur for instance. This datum confirms a fact: the Illuminati clowns who drive us to the abysm whether in America or in Western Europe really do not need a public opinion whose brains are continually moulded by servile and obsessive media. They just help themselves, confident in the global inertia underlined by De Tocqueville two centuries ago, an inertia that is congenital to classical western democracies. See the hundreds of stupid wars run by old imperialistic powers like England, France or the US.

But let us recall with the dictionary the different meanings of the word press. As a verb:

- To move or cause to move into a position of contact with something by exerting continuous physical force.

And as a noun, it means "a device for applying pressure to something in order to flatten or shape it or to extract juice or oil." Juice or oil: that means cash (liquid) or blood. For this is what western press got from the conflicts it encouraged in Syria, Ukraine, Libya or Iraq. But the bloody warmongers are never fed up. They ask more, like a monstrous baby-ogre. There will be oil, there will be cash, and there will be blood.

So let's listen and savour what the Pulitzer Prize tells us in his spicy prose about the western press:

"I'll tell you the solution, get rid of 90% of the editors that now exist and start promoting editors that you can't control," he says. I saw it in the New York Times, I see people who get promoted are the ones on the desk who are more amenable to the publisher and what the senior editors want and the trouble makers don't get promoted. Start promoting better people who look you in the eye and say 'I don't care what you say".

We all know that the "Watergate scandal" (Jean Baudrillard laughed at this creepy expression) was a complex operation designed to oust the last authentic - despite all his defaults - president in order to move forward the global agenda of the Trilateral (Nelson Rockefeller became Gerald Ford's vice-president); but what about the journalistic consequences?

"Woodward and Bernstein led to journalists wanting to have star power, get invited to the best Georgetown dinner parties and be best buddies with the political heavyweights, people you don't want to piss off."

Then Hersh plays the role of a rebellious citizen. He does a courageous job indeed, like Hollywood stars I spoke of last year, Gary Oldman, Mel Gibson, Javier Bardem or Sean Penn. But as we know in America it is the audience that is very dumb, not the famous.

"Do you think Obama's been judged by any rational standards? Has Guantanamo closed? Is a war over? Is anyone paying any attention to Iraq? Is he seriously talking about going into Syria? We are not doing so well in the 80 wars we are in right now, what the hell does he want to go into another one for. What's going on with journalists?"

Yes, what is going on indeed? For instance in France an ex-editor of prestigious newspaper Le Monde, an agitator who declared with a sinister emphasis that we are "all Americans" after the farce of the 9/11, continually argues in his editorials for a war against Russia. Will he get a Nobel Prize of Peace or of Literature to greet his delicate recommendations?

Anyone can avoid mainstream media and carefully pick his information elsewhere. He will be well-awarded, he will be sometimes confused, sometimes euphoric, sometimes disillusioned. But he will be a free mind. Truth will set him free.

Unfortunately, such quest of knowledge is not easy job to the formal citizen. He is much more interested by Ronaldo CR7's thighs or Kardashian's butt. This is why Vladimir Putin is worse than renowned western star Adolf Hitler, according to our barbaric western doxology.

Seymour Hersh knows how Obama will have to act to get the public opinion ready for our next war; and that makes him not optimistic:

"But I don't know if it's going to mean anything in the long [run] because the polls I see in America - the president can still say to voters 'al-Qaida, al-Qaida' and the public will vote two to one for this kind of surveillance, which is so idiotic".

We know indeed that the world is a tale told by Bush, pardon, "a tale told by an idiot, full of sound and fury, and signifying nothing". What signified the American Wars in Vietnam, in Afghanistan, in Syria, in Ukraine, anywhere?

At least, and thanks to Mr Hersh, a well-recommended voice labelled a terrorist by the insane Republican Party, we know that "the world is clearly run by total nincompoops more than ever ..."