The ANZAC myth, a cult of imperial dependence

The 25th of April 2015 will mark the centenary of an Australian and New Zealand attack on the Ottoman Empire at Gallipoli (present day Turkey), a failed operation carried out on behalf of the British Empire. The 'ANZAC spirit' has since been presented as a founding element of Australian national identity. 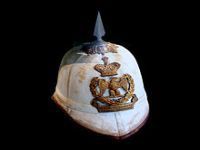 However the significance of the ANZAC myth lies not so much in its assertion of youthful sacrifice, bravery and mateship, as in a loyal and unthinking obedience to the military adventures of a great power. We have generated a sense of dependent obligation to participate in the next imperial war, seemingly blind to the slaughter and misery that brings other peoples.

It is no accident that, one hundred years after the disastrous Gallipoli operation, Australian troops are again being sent to the Middle East. While in 1915 the 'First Australian Imperial Force' was used by the British Empire to attack the Ottoman Empire, in 2015 the 'Australian Defence Forces' are being used as part of an extended North American operation to control the entire Middle East.

Australian armed forces have rarely been used to defend Australia, but frequently to assist imperial operations. There were not independent decisions to deploy the First and Second Australian Imperial Forces, during the great wars of the 20thCentury. In 1939 Prime Minister Robert Menzies said:

'Fellow Australians, it is my melancholy duty to inform you officially that ... Great Britain has declared war upon [Germany], and that, as a result, Australia is also at war.'

That is, Great Britain made the decision and Australia followed.

In 1942, after Imperial Japan evicted Imperial Britain from Singapore, we exchanged the British dummy for a North American suppository. From this time on there was barely a single aggression by Washington which Australia did not celebrate if not directly support.

In the case of the terrible American war in Vietnam, which stole more than 2 million lives, Washington fabricated a pretext for escalation (the Gulf of Tonkin incident) and Menzies (again PM, 25 years later) wrote South Vietnam's 'invitation' for Australia to participate.

Fragmentation of command was an enduring feature of a military that engaged almost exclusively in 'joint' operations. Only in the 1970s did Australia create a unified command of its own defence forces.

Every nation has its own creation myth, often some deft mixture of fact and fantasy. In the case of the USA an 'empire of freedom' was born in a republic which deployed the largest system of slavery in human history, with an economy dependent on human slavery. Washington, Jefferson and many other founders of that republic were slave owners to the day they died.

Australia's own creation myth, using the ANZAC disaster, is a 'White Australia' construction, as Marilyn Lake and Henry Reynolds wrote in their 2010 book What's wrong with ANZAC? It denies indigenous culture and affirms a cult of imperial dependence, celebrating nihilistic sacrifices for the great power.

The military traditions of many countries recognise sacrifices made in defence of independence nations. The ANZAC myth is something quite different.