Western intervention and the colonial mind

In these times of 'colour revolutions' language has been turned on its head. Banks have become the guardians of the natural environment, sectarian fanatics are now 'activists' and the Empire protects the world from great crimes, rather than delivering them. 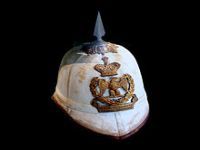 Colonisation of language is at work everywhere, amongst highly educated populations, but is peculiarly virulent in colonial culture. 'The West', that self-styled epitome of advanced civilisation, energetically reinvents its own history, to perpetuate the colonial mindset.

Writers such as Fanon and Freire pointed out that colonised peoples experience psychological damage and need to 'decolonise' their minds, so as to become less deferential to imperial culture and to affirm more the values of their own cultures. The other side to that is the colonial legacy on imperial cultures. Western peoples maintain their own culture as central, if not universal, and have difficulty listening to or learning from other cultures. Changing this requires some effort.

Powerful elites are well aware of this process and seek to co-opt critical forces within their own societies, colonising progressive language and trivialising the role of other peoples. For example, after the invasion of Afghanistan in 2001, the idea that NATO forces were protecting Afghan women was promoted and gained popularity. Despite broad opposition to the invasion and occupation, this 'humanitarian' goal appealed to the missionary side of western culture. In 2012 Amnesty International put up posters saying 'NATO: keep the progress going', on women's rights in Afghanistan, while the George W. Bush Institute collected money to promote Afghan women's rights.

The unfortunate balance sheet of NATO's 13-year occupation is not so encouraging. The UNDP's 2013 report shows that only 5.8% of Afghan women have had some secondary schooling (7th lowest in the world), the average Afghan woman has 6 babies (equal 3rd highest rate in the world, and linked to low education), maternal mortality is at 470 (equal 19th highest in the world) and average life expectancy is 49.1 years (equal 6th lowest in the world). Not impressive 'progress'.

In many ways the long 'feminist war' in Afghanistan drew on the British legacy in colonial India. As part of its great 'civilising mission' that empire claimed to be protecting Indian women from 'sati', the practise of widows throwing themselves (or being thrown) on their husband's funeral pyre. In fact, colonial rule brought little change to this isolated practice. On the other hand, the wider empowerment of girls and women under the British Raj was a sorry joke. At independence adult literacy was only 12%, and that of women much less. While India still lags in many respects, educational progress was much faster after 1947.

Such facts have not stopped historians like Niall Ferguson and Lawrence James attempting to sanitise British colonial history, not least to defend the more recent interventions. It might appear difficult to justify colonialism, but the argument seems to have a better chance amongst peoples with a colonial past seeking some vindication from within their own history and culture.

North American language is a bit different, as the United States of America claims never to have been a colonial power. The fact that US declarations of freedom and equality were written by slave-owners and ethnic-cleansers (the US Declaration of Independence famously attacks the British for imposing limits on the seizure of Native American land) has not dimmed enthusiasm for those fine ideals. That skilful tradition certainly influences the presentation of Washington's recent interventions.

After the invasions of Afghanistan and Iraq we saw a change in approach, with the big powers enlisting sectarian fanatics against the independent states of the region. Even the new Iraqi state, emerging from the post-2003 rubble, was attacked by these fanatics. An 'Arab Spring' saw Libya trampled by a pseudo-revolution backed by NATO bombing, then delivered to a bunch of squabbling al Qaeda groups and western collaborators. The little country that once had the highest living standards in Africa went backwards decades.

Next came brave Syria, which has resisted at terrible cost; but the propaganda war runs thick. Few in the west seem to be able to penetrate it. The western left shares illusions with the western right. What was at first said to be a nationalist and secular 'revolution' - an uprising against a 'dictator' who was killing his own people - is now led by 'moderate rebels' or 'moderate Islamists'. The extremist Islamists, who repeatedly publicise their own atrocities, are said to be a different species, against whom Washington finally decided to fight. Much of this might sound ridiculous to the average educated Arab or Latin American, but it retains some appeal in the west.

One reason for the difference is that nation and state mean something different in the west. The western left has always seen the state as monolithic and nationalism as something akin to fascism; yet in the former colonies some hope remains with the nation-state. Western populations have never had their own Ho Chi Minh, Nelson Mandela, Salvador Allende, Hugo Chavez or Fidel Castro. One consequence of this is, as much as western thinkers might criticise their own states, they are reluctant to defend others. Many who criticise Washington or Israel will not defend Cuba or Syria.

All this makes proxy wars more marketable in the west. We could even say they have been a relatively successful tactic of imperial intervention, from the contra war on Nicaragua to the proxy armies of Islamists in Libya and Syria. So long as the big power is not seen to be directly involved, western audiences can find quite attractive the idea that they are helping another people rise up and gain their 'freedom'.

Even Noam Chomsky, author of many books on US imperialism and western propaganda, adopts many of the western apologetics for the intervention in Syria. In a 2013 interview with a Syrian opposition paper he claimed the foreign-backed, Islamist insurrection was a repressed 'protest movement' that had been forced to militarise and that America and Israel had no interest in bringing down the Syrian Government. He admitted he was 'excited' by Syria's uprising, but rejected the idea of a 'responsibility to protect' and opposed direct US intervention without a UN mandate. Nevertheless, he joined cause with those who want to 'force' the Syrian Government to resign, saying 'nothing can justify Hezbollah's involvement' in Syria, after the Lebanese resistance group worked with the Syrian Army to turn the tide against the NATO-backed jihadists.

How do western anti-imperialists come to similar conclusions to those of the White House? First there is the anarchist or ultra-left idea of opposing all state power. This leads to attacks on imperial power yet, at the same time, indifference or opposition to independent states. Many western leftists even express enthusiasm at the idea of toppling an independent state, despite knowing the alternatives, as in Libya, will be sectarianism, bitter division and the destruction of important national institutions.

Second, reliance on western media sources has led many to believe that the civilian massacres in Syria were the work of the Syrian Government. Nothing could be further from the truth. A careful reading of the evidence will show that almost all the civilian massacres in Syria (Houla, Daraya, Aqrab, Aleppo University, East Ghouta) were carried out by sectarian Islamist groups, and sometimes falsely blamed on the government, in attempts to attract greater 'humanitarian intervention'.

The third element which distorts western anti-imperial ideas is the constrained and self-referential nature of discussions. The parameters are policed by corporate gatekeepers, but also reinforced by broader western illusions of their own civilising influence.

A few western journalists have reported in sufficient detail to help illustrate the Syrian conflict, but their perspectives are almost always conditioned by the western 'liberal' and humanitarian narratives. Indeed, the most aggressive advocacy of 'humanitarian intervention' in recent years has come from liberal media outlets like the UK Guardian and corporate-NGOs such as Avaaz, Amnesty International and Human Rights Watch. Those few journalists who maintain an independent perspective, like Arab-American Sharmine Narwani, publish mostly outside the better-known corporate media channels.

Imperial culture also conditions the humanitarian aid industry. Ideological pressure comes not just from the development banks but also the NGO sector, which maintains a powerful sense of mission, even a 'saviour complex' about its relations with the rest of the world. While 'development cooperation' may have once included ideas of compensation for colonial rule, or assistance during a transition to independence, today it has become a $100 billion a year industry, with decision making firmly in the hands of western financial agencies.

Quite apart from the dysfunction of many aid programs, this industry is deeply undemocratic, with powerful colonial overtones. Yet many western aid workers really believe they can 'save' the poor peoples of the world. That cultural impact is deep. Aid agencies not only seek to determine economic policy, they often intervene in political and even constitutional processes. This is done in the name of 'good governance', anti-corruption or 'democracy strengthening'. Regardless of the problems of local bodies, it is rarely admitted that foreign aid agencies are the least democratic players of all.

For example, at the turn of this century, as Timor Leste gained its independence, aid bodies used their financial muscle to prevent the development of public institutions in agriculture and food security, and pushed that new country into creating competitive political parties, away from a national unity government. Seeking an upper hand amongst the 'donor community', Australia then aggravated the subsequent political division and crisis of 2006. With ongoing disputes over maritime boundaries and petroleum resources, Australian academics and advisers were quick to seize on that moment of weakness to urge that Timor Leste's main party be 'reformed', that its national army be sidelined or abolished and that the country adopt English as a national language. Although all these pressures were resisted, it seemed in that moment that many Australian 'friends' of Timor Leste imagined they had 'inherited' the little country from the previous colonial rulers. This can be the peculiar western sense of 'solidarity'.

Imperial cultures have created a great variety of nice-sounding pretexts for intervention in the former colonies and newly independent countries. These pretexts include protecting the rights of women, ensuring good governance and helping promote 'revolutions'. The level of double-speak is substantial.

Those interventions create problems for all sides. Independent peoples have to learn new forms of resistance. Those of good will in the imperial cultures might like to reflect on the need to decolonise the western mind.

Such a process, I suggest would require consideration of (a) the historically different views of the nation-state, (b) the important, particular functions of post-colonial states, (c) the continued relevance and importance of the principle of self-determination, (d) the need to bypass a systematically deceitful corporate media and (e) the challenge of confronting fond illusions over the supposed western civilising influence. All these seem to form part of a neo-colonial mindset, and may help explain the extraordinary western blindness to the damage done by intervention.