Researchers, officials and residents hold Sydney Sheikh Fedaa Majzoub responsible for two appalling massacres and kidnappings in Northern Syria. Worse, the sectarian sheikh has for some time enjoyed protection from the Australian media as well as from some political figures. 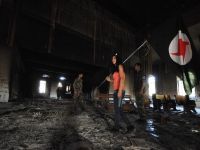 Majzoub has been implicated in the mass atrocities at Ballouta and Kessab, both near the Turkish border.  In Ballouta (August 2013) around 200 villagers were killed and another 200 kidnapped, by a combination of FSA and al Nusra jihadists. The same groups invaded the mainly Armenian Christian border town of Kessab (March 2014), killing 80 people and desecrating churches.

Syrian officials have identified Fedaa Majzoub as a key organiser of the Ballouta atrocities and he has admitted involvement in the Kessab kidnappings, suggesting however that they were humanitarian 'evacuations'. The only Australian member of the now defunct Syrian National Council (SNC), Majzoub remains a member of the NSW branch of the Australian National Imams Council (ANIC). The ANIC has made no statement on his activities in Syria.

Fedaa's younger brother Mustapha was killed in August 2012, in an area near jihadist-occupied Selma, in northern Syria. At that time the Australian media mostly repeated the family's claim that he had gone to Syria for humanitarian or religious purposes. Other evidence makes it clear, however, that he joined sectarian jihadists. On his Facebook page, before his death, he expressed great joy that '72 from the shabeeha [Alawi or loyal government supporters] have just been captured in the Kurd mountains in Latakia. It's going off everywhere, Allahu Akbar.' One of his friends asked 'Have they been slaughtered yet?'

Nevertheless, the Arabic language newspaper An-Nahar (27/08/12) published a statement from the then NSW Premier Barry O'Farrell, mourning the death of 'respected cleric' Mustapha Majzoub. This was despite the fact that, five days earlier, The Australian newspaper had quoted intelligence sources saying that Mustapha was 'known to law enforcement and the intelligence community for extremist views'. Indeed, the younger Majzoub's public lectures had vilified the minority Alawite community as 'enemies against Islam', calling for 'the highest level of jihad' against them.

Sheikh Fedaa Majzoub is every bit as sectarian as was his little brother. US citizen Lily Martin Sahiounie, married into a Muslim family and resident in northern Syria for decades, used to live next door to the Majzoub family. She says Fedaa preached "sectarian hatred ... a basic Wahhabi, al Qaeda type of radical Islam".

Regardless of this, the Tel Aviv based correspondent for the Sydney Morning Herald, Ruth Pollard, went to visit Fedaa Majzoub in Salma - a visit which necessarily required illegal, jihadist-hosted entry into Syria. In a puff piece she spoke of Fedaa as an 'honest broker' who was attempting to 'build bridges' between the SNC and the Free Syrian Army (FSA).

Much of the Australian corporate media remained protective of Fedaa, even after the Syrian Government accused him of direct involvement in the Ballouta atrocity.

In December 2013 Syria's Communications Minister Omran al Zoubi told an Australian delegation, of which I was a member, that 'the jihadist Sheikh Fedaa al Majzoub is responsible for the kidnapping of 106 people and, unfortunately, he was using Australian telephone networks. The worst of this is that the Australian Government is well aware of this. But it has turned a blind eye.'

The Ballouta massacre and kidnappings was even documented by the Washington-based Human Rights Watch, which usually moves in lock-step with the Obama White House, blaming the Syrian Government for all crimes and shielding the so-called 'moderate rebels'.

Lily Martin Sahiounie was very close to this massacre. She says:

'In August 2013, Radical Islamic terrorists entered at night the sleeping village of Ballouta ... They went methodically from house to house killing men, women and children in their beds. They cut open the stomach of a pregnant woman and hung the fetus in the trees.  Many survivors ran for their lives and later gave their eye witness reports of what happened.  The Radical Islamic terrorists kidnapped 100 small children, and a few older females ... [they were held] in a basement underground in the Syrian village of Selma'.

Lily notes that 44 of the Ballouta children were released in a mid-2014 prisoner swap, nine months later. Many are believed still held in Selma, to this day. From evidence of those released:

'they endured torture, abuse and some of the children [were] killed by the terrorists.  They said their captors were a mixed group: some were Syrian and many were foreigners ... several of the terrorists spoke Arabic ... [but] also spoke English much of the time among themselves'.

Two reports have emerged (ISTEAMS and Mesler) saying it was videos of these children, drugged and held hostage in Selma, that were sent to jihadists in the East Ghouta (rural Damascus), to be uploaded and used in the infamous chemical weapons incident two weeks later. No trace was ever found of the bodies of the children said to have been gassed in the East Ghouta. Relatives of the kidnaped children remain too scared to speak out, because of those still held hostage.

Independent journalist Chris Ray told The Australian of Minister al Zoubi's accusations against Fedaa and reported in more depth at Crikey (09/01/14). But the Minister's accusation was heavily re-spun in an Australian headline (02/12/14): 'The respected Aussie imam smeared by the Assad regime'. Anti-Syrian politics stopped them from denouncing an Aussie terrorist.

Fedaa was contacted and his denial quoted by The Australian the next day (03/01/14): 'Sheik Majzoub told The Australianthese civilians were still being held hostage within Syria, and their captors were hoping to negotiate an exchange for other prisoners held by the regime. 'I heard about it, I know about it but I was not involved in it at all', he said. He claimed he had been in Europe, working on preparations for the Geneva peace talks.

In March 2014 another massacre and kidnapping took place in the Armenian Christian town of Kessab, as thousands of jihadists from FSA, al Nusra and other jihadist groups poured into the little border town, with obvious support from Turkish troops. Multiple accounts say that dozens were killed, churches were desecrated and many more kidnapped and taken to Turkey.

Time magazine tried to spin the invasion as a non-sectarian 'military offensive', with the Syrian army 'indiscriminately bombarding' the town. Their headline (27/03/14) was kind to the al Qaeda cut-throats: 'Rebels reassure Christians after capturing key Syrian border town'.

Fedaa Majzoub is said to have admitted his involvement in the Kessab kidnappings, in an interview with Turkish writer Yusuf Selman İnanç. His report in a Malaysian newspaper says:

'I interviewed one of the top officials of the Free Syrian Army (FSA), Fedaa Majzoub, who organized the evacuation of the Armenians from the town, first to a safe village and finally to Turkey. He said, "Opposition groups have nothing to do with the Armenian population. We captured the town as a part of our war strategy. We are trying to go down to Latakia to increase the pressure on Damascus. Young Armenians and Arabs left the town. We helped the old people and sent them to Turkey".'

However Armenian news agency reports say 2,000 people from over 600 families fled their homes in advance of the invasion. The Armenian National Committee International said it had warned of just this sort of attack 'for months'. Their reports say 'three days of brutal cross-border attacks from Turkey, by al-Qaeda affiliated armed bands ... have cost 80 lives and forced the civilian population of the area to flee to the neighbouring hills, with many seeking safe haven in ... Latakia and Basit.'

Lily Martin Sahiounie owns a house in Kessab, and says it was destroyed. 'I was in Kassab on June 17th ... 2 days after liberation ... all three churches were destroyed ... they [had] lit huge bonfires and burnt the entire interior of the church ... [the village] was not bombed from the air ... it was damaged by street fighting ... [and from] vandalism by the terrorists ... [including graffiti] threats like 'Be Muslim or Die'.'

Irish academic Dr Declan Hayes also visited Kessab, in August, with Syrian colleagues. He mostly confirms the Armenian news reports. 'Kessab was [still] covered in intimidating graffiti .. the town was systematically robbed ... Not only were the churches vandalised with crosses and the like removed but the rebels lit tyres in the churches ... there was wide scale vandalism to the graveyard ... sending out a strong message that Armenians have no future in the areas they [the jihadists] control ... though [some elderly people] do confirm that they were well treated in Turkey, they also confirm that none of them wished to be 'liberated' by these rebels ... [or] moved to Turkey.'

In Kessab Dr Hayes and his colleagues found a letter written (in English) by an Australian jihadist to his family, indicating there was at least one other Australian involved in that attack.

Lily says: 'the 24 elderly people were first held hostage in Kessab for 11 days ... then moved from Kessab to Vikify (Turkey) ... the [same] day that Ahmed Jarba [the US-backed opposition leader] arrived ... Kessab had no military significance ... I believe that Fedaa Majzoub plotted to keep those 24 elderly people hostage, [so] they could later use them in a prisoner exchange.'

During the occupation of Kessab, Majzoub was involved in setting up a new religious group in Turkey, which he insisted was non-political. Despite his own recent background in the SNC and the FSA, he claimed the Syrian Islamic Council was 'a religious reference body without any political agenda'. However the group's President Osama Rifai said the group wanted to 'help assure stability in the country "after Assad falls" '.

Lily Martin Sahiounie has complained about her own [US] government's involvement in the attacks on Syria and is furious at the Australian involvement in these atrocities. She says: 'Radical Islam is alive and well in Sydney.  It is so well cultivated there, that they even export it. Yet while the Australian media had non-stop coverage of the siege and resulting death of two persons in Sydney, they have not mentioned the innocent unarmed Syrian civilians maimed, killed and kidnapped by well-known extremist Muslim residents of Sydney.' She says: 'Fedaa Majzoub should be hunted down, arrested and tried as a war criminal'.