The latest massacres perpetrated by militants from the Islamic State in Iraq and the Levant (ISIL) underlines the sheer evil behind the barbaric crimes of this horde, which targets innocent civilians, including women and children and defenseless old people, based on their ethnic groups or religious beliefs and executes them or holds them as slaves. 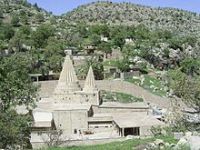 The latest massacres of civilians by fighters from the Islamic State in Iraq and the Levant (ISIL) band of murderers have targeted several religious and ethnic groups in Iraq and have systematically and indiscriminately targeted unarmed, defenseless civilians, including women, children and seniors. Their horrific crimes include sodomy, perpetrated against young male victims.

According to the United Nations organization's UN High Commissioner for Human Rights, Navi Pillay, ISIL is not only committing massacres but other shocking human rights abuses, including sexual crimes (rape of women and children, both girls and girls), human trafficking (selling people into slavery), forced religious conversions and destruction of religious and cultural sites.

The targets are chosen because of their religious beliefs or the ethnic groups to which they belong and include Christians, Kaka'i, Sabaeans, Shabakhs, Turkmen and Yazidi.

At the beginning of this month, in Nineveh Governorate, thousands of Yezidi were kidnapped and forced to convert to Sunni Islam, and those men who refused to convert were murdered in front of their wives, children and other family members who were sold into slavery or given to ISIL members to serve as their personal slaves. The same thing happened to hundreds of Yazidi in Cotcho, Southern Sinjar. Survivors told the UNO that their children had been gang raped, and this included young and teenage boys.

But it is not only the Yazidi who are being targeted. Since the middle of June, according to the UNO's Human Rights Commissioner, 13,000 members of the Turkmen (Shiite) community at Amirli in the Governorate of Salah al-Din, including some ten thousand women and children, have been under siege by ISIL, the latest news being that they are facing an imminent massacre.

These reports follow a massacre of 670 prisoners in Mosul in early June, when the Badoush prison was overrun, the Sunni inmates were told to leave and the rest were lined up and machine-gunned. Then there have been attacks against Christians, Kaka'I, Sabeans and Shabakhs.

The Americans and British were quick to destroy the Iraqi State back in 2003, outside any norms of international law and without any casus belli. The result is the chaos we see today, in which innocent civilians are being murdered in cold blood, girls and boys are being raped and held in the most deplorable conditions in their tens of thousands, a direct consequence of the unilateral action taken by the USA and UK, as predicted in this column back in 2002.

It is the responsibility of those who created the conditions for this outrage to happen to clear up the mess they made, and pay for it, under rules established by a UN mandate. If the US and UK military are too scared of ISIL, then they should have thought of the consequences of their actions in an extremely complex mosaic of peoples, creeds and beliefs which was Saddam Hussein's Iraq.

The Kaka'i are part of the Yarsan or Ahl-e Haqq community, and follow a religion founded in the fourteenth century. There are around one million Kaka'I, living between Western Iran and Eastern Iraq.

The Yazidi religion dates from the year 4,750 so precedes Judaism, Christianity and Islam. Its roots are in ancient Assyrian and Mesopotamian traditions.

The Sabaeans originated in what is now Yemen in the Arabian Peninsula. An ancient people, they speak a pre-Arabic language and have been linked by some historians to the Kingdom of Sheba.

The Shabaks are also an ancient people with their own language and ethnic identity following a pre-Islamic religion.

The Turkmen are the third largest ethnic group in Iraq, with their own culture and language.