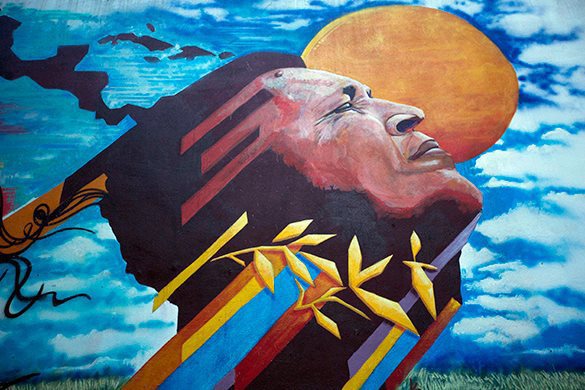 Years ago at a state dinner, I was sitting next to a member of the visiting Venezuelan government delegation. Knowing that Venezuela's oil revenues from the 1940s to the 1960s exceeded 13 billion US dollars, more than the total amount of "Marshall Aid" allotted to Europe (1948-52), I turned to my neighbor wondering what had happened to all that money. After all, Venezuela's population in 1950 was only 5 million and had reached 10 million in 1970, while Europe had hundreds of millions of inhabitants.

"You had a lot of money to spend among just a few people," I remarked, "yet Venezuela is clearly not better off than Europe. How come? Where did all that money go?"

"Well, I don't have it," my neighbor answered with a big smile.

Perhaps he did not, but many of his friends obviously did. Indeed, most of the oil revenues were taken by the small Venezuelan ruling class, made up of a few traditional families and a number of political hangers on. Such as President Marcos Pérez Jiménez who in 1958 was chased out of the country by a massive popular uprising. As he was dashing to the plane taking him to exile in Miami, it is said that dollar bills were falling out of his overstuffed briefcases. With leaders like that, it hardly comes as a surprise that most Venezuelans remained poor and continued to be deprived of the amenities of modern life, although in the meantime a precarious middle class had developed.

During his first presidency (1974-1979), Carlos Andrés Pérez (popularly known as "CAP") nationalized the oil industry and tried to spread the oil revenues a bit more widely among the population. Along the way, however, he managed to acquire an impressive personal fortune. CAP was reelected in 1989, partly because voters believed he would stop stealing oil revenues, since had already stolen so much during his first term. It was felt CAP was satisfied and would now turn his attention to wiping out poverty in Venezuela. However, the opposite occurred: this time, CAP began to rob the state treasury more thoroughly than anyone before him ever had.

Enter Hugo Chávez, the dashing young parachute commander, who led a broadly based popular revolt against CAP and eventually managed to force him out of office in 1993. After Chávez was himself elected president in 1999, he became the first Venezuelan leader to actually make serious efforts to carry out social reforms. The broad support he thus managed to build made him very dangerous in the eyes of the Washington regime. Short of outright armed intervention, the US tried every tool in its box of political dirty tricks to eliminate Chávez from power. But Hugo managed to stay against the odds. Thus Chávez became the first Venezuelan leader to stand up to the US and call its bluff. Many suspect that when Chávez suddenly fell ill with a nasty case of cancer (2010), it was the doing of the Washington regime. (After all, there is documentary evidence that the Washington regime, through its spy services, has tried in the past to poison foreign leaders it dislikes, such as Fidel Castro).

When Chávez died in 2013, the US had hoped that would be the end of it. On the contrary, Chávez' successor, Nicolás Maduro proved at least as resilient, shrewd and tough.

By declaring Venezuela a "national security threat" to the US, it is obvious the Washington regime has decided time is up for Maduro. Now that the gloves have really come off, we can expect more covert action, coup attempts, staged events (such as "color revolutions"), sanctions, and all the other kinds of threats, blackmail, bullying and arm twisting the US is so good at.

And, mind you, the Washington regime purports to worry about "democratic processes" in Venezuela and the "violation of human rights of Venezuelan citizens!" White House spokesman Josh Earnest (what is in a name?) was quoted as saying: "we are deeply concerned by the Venezuelan government's efforts to escalate intimidation of its political opponents."

Come to think of it. Perhaps, Venezuela does indeed constitute a threat.

That's right, a threat to the continued repression of human rights in the US, without which the Washington regime cannot remain in power.

Russia's cooperation with Venezuela may stagnate after Chavez