Loud statements were made by Hugo Chavez on November 8 on his weekly Sunday television show "Alo Presidente" (Hello, President!) 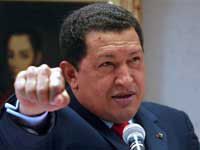 In his show, the main leader of the struggle against American influence in Latin America came upon Colombia, the US main ally in the region. Chavez blamed the Colombian government for turning the country into another state of the USA.

The basis for accusation was the agreement signed on October 30 between Colombia and the US. According to the agreement, the US was granted a right to use seven Colombian military bases to fight drug trafficking and international terrorism.

Venezuelan officials believe that Colombian territory can serve as base for an attack against Venezuela and overthrow of Chavez. Therefore, Chavez ordered the Venezuelan military to begin preparations for a war with the neighboring Colombia.

"Don't be mistaken, Mr. Obama, and order an overt aggression against Venezuela using Colombia," Chavez said in a reference to U.S. President Barack Obama. He said that should Americans attack Venezuela, a war will be waged that would last a hundred years and spread all over the continent.

The Colombian government in turn denied all accusations and said it would appeal to international bodies for assistance. The government mentioned in its statement that Colombia intends to appeal for help from the Organization of American States or United Nations Security Council.

The officials say that Colombia has no intentions to undertake aggressive attacks against Venezuela. They explained that the military agreement with America existed to combat drug traffickers and leftist guerrillas. The Colombian government announced that it was prepared to have an open dialogue with Venezuela based on the norms of the international legislation.

Chavez’s harsh statements came in time when the situation at the Colombia-Venezuela border became more aggravated. On November 6, approximately a hundred of Colombian citizens with no documents were arrested in Barinas, Venezuela. Men and women riding in three buses were stopped at the village of La Caramuca. They were suspected in preparing a diversion against Venezuela. The Venezuelan government decided to send 15 thousand of additional soldiers to the border and shut down several border crossings.

At the end of October, the bodies of nine Colombian citizens kidnapped on October 11 were found in the border state of Tachira. The governments of the two countries were arguing for a while about transportation of the bodies to Colombia.

Venezuela petitioned Colombia and accused it of espionage. In response, Colombia asked Spain for help in the investigation of the Colombian citizens’ deaths.

The state of affairs in South America remains alarming. An armed conflict between the two countries is very likely. Two years ago the war was barely prevented through mutual efforts of all countries of the continent.

There were quite a few harsh statements lately, but the situation was not aggravated to the point of a real conflict. Therefore, there is a chance that a war in South America can be avoided.