Russia's cooperation with Venezuela may stagnate after Chavez

The friendship between Russia and Venezuela will end with the departure of Hugo Chavez. No one can say how the relations may develop between the two countries after the President of Venezuela leaves his office. It is already clear that the departure of Chavez is not likely to have a positive effect on the Russian-Venezuelan relations. Meanwhile, Russia has multi-billion dollar investments in the economy of Venezuela. 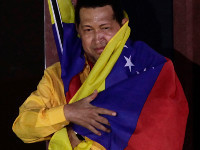 The story of close economic relations between Russia and Venezuela is is primarily the story of relations in the military and industrial sector. The active development of these relations began in 2005, when Venezuela signed an agreement with Russia on the purchase of 100,000 AK-103 - the export version of the Kalashnikov assault rifle. The news about the agreement received mixed reactions from the world community.

The Venezuelan side explained the need for the rifles with the danger of the U.S. military intervention. Despite the protests of the United States, the deal took place, since it violated no formal international standards.

In 2006, Russia signed a contract for the construction enterprises in Venezuela for the licensed production of AK-103 and 7.62-mm rounds of. That same year, the U.S. imposed an embargo on the sale of arms to Venezuela. In response, Chavez announced the complete cessation of arms purchases in the U.S..

Within the framework of this cooperation, Venezuela purchased 100,000 more Kalashnikov rifles (the total cost of purchased AK-103 was 474.6 million dollars), 38 Mi-35 combat helicopters, 24 Su-30 and signed a contract for the purchase of 12 Tor-M1 small range air defense systems. In addition, since 2005, the republic has purchased the following hardware from Russia: tanks T-72B1, armored vehicles BMP-3M, BTR-80A, 122-mm multiple rocket launchers 9K51 BM-21 "Grad" and other equipment. The cost of the already concluded military contracts with Venezuela is evaluated at about $10 billion, says Utro.Ru. Relying on the military and economic support from Russia, Chavez has repeatedly threatened the U.S., sometimes quite strongly.

In addition to multibillion-dollar arms contracts, Russia also invested in the economic sector of the oil industry in Venezuela. It is planned to set up an oil consortium to develop oil fields in the country. The project involves all major Russian oil and gas companies. The project is estimated at $20 billion.

Russia has other interests in Venezuela. In particular, there is a plan to create a Russian-Venezuelan bank with the capital of four billion dollars.

However, all of these projects are now endangered due to Hugo Chavez's departure from the national administration. After all, it was Chavez and his ideological beliefs that largely determined Venezuelan economic policies. Analysts predict that even if Chavez's successor - the current Vice-President and Foreign Minister Nicolas Maduro - comes to power in Venezuela, the cooperation may become a lot less favorable for the Russian side.

Meanwhile, the political sentiments of the Venezuelans are not so obvious as they may seem to be. In past elections, Chavez scored a victory over his main rival, opposition activist Henrique Capriles. The margin was only nine percent, but many questioned the figure anyway. For the time being, the position of the Venezuelan opposition is still very strong, and its rise to power guarantees a radical change of the political course.

Hugo Chavez is unlikely to be able to return to his job as the president of Venezuela. The Venezuelan leader has been seriously ill for several years. In July 2011, it was announced that he had a malignant tumor. In May of this year, it was said that Cahvez had metastatic rhabdomyosarcoma - a type of muscle tissue cancer. Chavez has received several courses of treatment, but they have not brought the desired results. According to latest forecasts from his doctor, Jose Rafael Marquina, the president has a few months left. The doctor even unveiled the approximate date: Chavez may pass away in April 2013.