Virtual March of Solidarity for RTS terrorist victims in 1999

On April 23, 1999, sixteen Serbian journalists were murdered in a terrorist attack against the Serbian RadioTelevision station RTS in Belgrade, perpetrated by a NATO coward in the sky, member of a coalition of which France was a member. Where were the millions of people marching in solidarity of journalists back then? 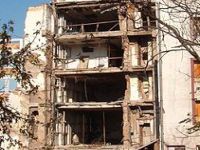 Let us start where we should, namely in solidarity with the twelve French journalists and workers at Charlie Hebdo satirical magazine, with their families and loved ones, and let us not take an opinion piece such as this as being in any way, shape or form a manifestation of disrespect or belittling of the horrendous and wholly unacceptable terrorist attack which took place on January 7. Across France and across the world, millions of people marched in solidarity with the victims. But there are others.

So where were these millions of people on April 23 1999, when a coward in the sky  in an aircraft belonging to NATO, flying in an operation in Yugoslavia in which France was an active member (Operation Allied Force) strafed the Serbian RTS RadioTelevision station and murdered not twelve, but sixteen civilians(*) doing their job?

Where were these millions of people in 2011 when France, as an active member of the FUKUS Axis (France-UK-US) armed, financed, aided and abetted hordes of terrorists on NATO's own lists of proscribed groups and unleashed them against the people of Libya? Where were these millions of people when the Libyan TV station was broken into in Tripoli and when the news anchor was gang raped and killed?

Where were these millions of people when terrorists armed, aided, funded and abetted by NATO, including France, ran amok in Libyan cities, towns and villages impaling little girls on iron rods, decapitating women and raping the bodies, slicing the breasts off women in the streets, slitting people's throats, sodomizing men and boys, torturing people, setting them on fire after dousing them with gasoline?

Where were these millions of people when American troops sodomized, tortured, humiliated and butchered people detained illegally in Iraq, setting dogs on them, throwing snakes at them, urinating in their food, water-boarding them and depriving them of sleep?

Where were these millions of people when the West, including France, armed, funded and aided terrorists fighting against President Assad of Syria, including the takfiri group Islamic State? Where were they when Syrian women were being tied to trees and gang raped, where were they when Syrian girls were brutally assaulted, sexually, by multiple rapists showing such barbaric brutality that their vaginas and anuses were ripped open? Where were these millions of people when terrorists backed by the West ran through peaceful Syrian communities butchering Christian priests and raping nuns, before decapitating them?

So terrorism and terrorist are words used and abused by a West which we see does not only the same, but far worse. And then its leaders and media justify its terrorist acts as "acceptable and necessary". Pardon me for shouting HYPOCRISY!

(*) Let us stand in solidarity with the 16 Serbs murdered by a terrorist in the NATO operation of which France was a member.