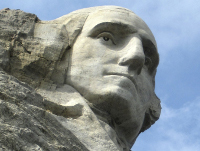 In recent decades, Russia has undergone vast political and social reforms underscored by a return to religious roots, the end of Soviet Communism, and new existential threats (among them domestic Islamic radicalism).  All of these changes have necessarily resulted in political transformation.

As Russia has changed, its former adversary - the United States of America - has also changed, with breakneck speed.  America is in rapid moral and institutional decline - fueled by lawless government leaders and a seismic move away from God (at least the Judeo-Christian God that underpins Russian and Western societies), as well as the parallel rise of an entertainment escapism that displaces public awareness and voter engagement while blinding citizens to the loss of freedom and resultant blurring of moral boundaries.

In short, America is beginning to resemble the regimes it topples and wars against.  America no longer has the moral credibility to lecture other nations on the incontrovertible virtues of democracy and republican government.  Consider recent developments that are quickly becoming the new "normal" in Russia's once great adversary:

President Obama has dispensed with Congress, making laws out of thin air - surpassing the greatest violations of presidential power in recent years, even predecessors Bush and Clinton (both of whom used signing statements and executive orders to circumvent Congress).  Obama doesn't even bother to create the illusion of legitimacy.  Obama changes existing laws that have been on the books for years, e.g. the Welfare Reform Act, without Congress.  He writes laws, e.g. the Dream Act, without Congress.  He passes treaties that have never been ratified, e.g. Law of the Sea Treaty, without Congress.  And he even eliminates entire sections of his own healthcare reform law - all without seeking Congress to make amendments or pass revisions.  These actions make Obama a virtual king, potentate, dictator, ruler - and not the elected and accountable president of a sovereign people.  Even leftist pundits are referring to the new America as a nascent "banana republic."  That's what Democrat strategist and pollster Patrick Caddell said in a column for Fox News.   Obama describes this new (old?) approach to government as, "We can't wait."  The U.S. Constitution was designed to curb unscrupulous politicians like Obama who believed their agenda mattered more than freedom.

The U.S. Senate, once referred to as America's "greatest deliberative body," has been turned into a rubber-stamp for Obama's appointments and other whims - with Majority Leader Harry Reid's illegal rule change eliminating the filibuster for any major appointments.  The healthcare bill was never really passed by the House of Representatives, either - since Democrat Speaker Nancy Pelosi "deemed" it passed before a roll-call vote.  Democracy in action?

The U.S. Military has now been authorized by the National Defense Authorization Act (NDAA) of 2011 to indefinitely detain American citizens without due process and kill them without trial - a direct and egregious violation of the U.S. Bill of Rights.  Despite federal courts ruling these new powers unconstitutional and voiding the provisions of the (NDAA) that gave effect to these measures, President Obama is arguing in courts to have "indefinite detention" restored.

President Obama now claims the power to use the CIA and drones to kill U.S. Citizens and civilians deemed "threats" in other countries, using the broad and ill-defined label of "terrorist" as his rationale.  The PATRIOT Act gives the president carte blanche to define who is and is not a "terrorist."  Obama has indicated that "jihadi" will be removed from the national security lexicon, while at the same time having his Department of Homeland Security (DHS) - which to many Americans sounds suspiciously euphemistic - release studies identifying pro-life citizens, Republicans (fifty percent of America) and Christians as potential "terrorists."  As is the case in every totalitarian regime, political opposition is silenced, neutralized, or "cleansed."

To wit, political opposition is being progressively targeted and silenced by the Internal Revenue Service (IRS), which, after being thoroughly trounced by Congressional inquiries for its unethical behavior in targeting Americans for their political beliefs, is now going further - redefining 501c3s as organizations without the right to express opinions or advocate for specific ideas.  In other words, the IRS is banning free speech, unless this speech is individual in scope or sanctioned by the IRS.  There is nothing "free" about selective free speech.

The DHS is buying a billion rounds of hollow point ammunition, a type of ammo only used to kill and severely maim, and not even used by law enforcement.  Hollow point ammunition is largely prohibited in most contexts, making its sudden and large-scale acquisition by the DHS overtly conspicuous.  In addition to its ammo buying spree, DHS is purchasing armored personnel carriers.  DHS has also been conducting simulated target practice against families - mom, dad, and kids.  When would families ever be a target and why would this ever be the case?  DHS clearly has intentions at odds with American freedom and individual liberty.  Though "nothing to see here" PR campaigns abound, it is significant that former four star generals, ex-Undersecretaries of Defense, and many more, are going public with revelations that Obama is "transforming" the military into his own enforcement machine.  In a recent interview, former Reagan Undersecretary of Defense Frank Gaffney said that the U.S. military was being prepped for use against American citizens.

Meta-data is being collected on every citizen in America, and phone conversations and emails, as well as social media, are now openly reviewed by swaths of different government agencies, making the constitutionally protected right to privacy a thing of the past.  Edward Snowden is treated as a "traitor," but Russian defectors who delivered similar info incriminating the Soviet Union for its oppression of individual liberty are awarded notoriety and places of honor.  Can America still make pretenses to moral superiority when the positions have been so clearly reversed?

Journalists are threatened by federal agents, and those who are not threatened are paid by intelligence agencies to shill for Obama.

Maoists sympathizers are appointed to key government posts, and "czars"-- of which there were only two in every prior administration, dating back to Nixon - are now shadowing existing members of Obama's cabinet, and many of these czars have not gone through the mandated confirmation process required of the heads of major departments (state, treasury, defense).

Citizens are forced to buy products by the government, and can have their homes seized if they do not do this (ObamaCare allows tax liens for individuals who do not buy Obama's mandated health insurance.)

The U.S. government has debts (with the inclusion of unfunded federal liabilities) that quadruple world GDP - a hallmark of totalitarian societies.  The beneficent "dear leader" gifts the masses with the wealth of the job-creators, simultaneously creating a pseudo-panacea while also destroying the foundations of economic growth - making the would-be dictator the only salvation for the suddenly displaced worker.

As financial expert Jerome Corsi, PhD., remarked in a recent interview with me, "Things I was seeing four or five years ago are really beginning to happen in earnest right now.  China is starting to look at ports, these special zones where China can have commerce set up.  China may do some really innovative things like setting up manufacturing in the United States.  But China wants to control and own tangible assets so as to reduce the impact of a loss when the system collapses, and it's certainly going to collapse.

"Banks are probably all within one crisis away from facing another reserve crisis and requiring more government bailouts.  We have a debt based economy right now, that's being propped up by debt, and propped up by us buying our own debt," stated Corsi.

America as the "land of the free" and the "last best hope for mankind," a place for of refuge for the "tired, huddled masses yearning to breathe free" is coming to an end - short of a miracle.  And this has global implications.  It is time for new leadership on the world stage.

If these trends are not corrected or countered by outside forces, the American military industrial complex will crush not only its own people, but devour the newfound liberty and prosperity of the Eurasian continent as well.

Russia, led by Vladimir Putin, is poised to step into this vacuum.  Putin is a man "for such a time as this."

Morality is inseparable from "law."  The American founding fathers understood this very well:

[I]t is religion and morality alone which can establish the principles upon which freedom can securely stand. The only foundation of a free constitution is pure virtue.

Signer of the Constitution and Declaration of Independence

[O]nly a virtuous people are capable of freedom. As nations become corrupt and vicious, they have more need of masters.

Signer of the Declaration of Independence

The only foundation for a useful education in a republic is to be laid in religion. Without this there can be no virtue, and without virtue there can be no liberty, and liberty is the object and life of all republican governments.

Russian President Putin also understands the connection between virtue and a government that protects individual freedom.  At a "Constitution Day" observation in Russia, Putin declared, "There are more and more people in the world who support our position on defending traditional values that have made up the spiritual and moral foundation of civilization in every nation for thousands of years: the values of traditional families, real human life, including religious life, not just material existence but also spirituality, the values of humanism and global diversity."

Hinting at the U.S., Putin said that today, "many nations are revising their moral values and ethical norms, eroding ethnic traditions and differences between peoples and cultures."

"Society is now required not only to recognize everyone's right to the freedom of consciousness, political views and privacy, but also to accept without question the equality of good and evil, strange as it seems, concepts that are opposite in meaning," Putin said.

He said such "destruction of traditional values from above" produces problems for society and essentially is "anti-democratic."

The greatest danger to America - and consequently to the nations which depend on American consumer spending, and liquidity - is not military attack, but implosion - an implosion caused by moral gangrene.

The western world must have a revival:  morally, economically and politically if it is to survive any such implosion.  But in the absence of American leadership, the world must look to another power - Moscow.  Vladimir Putin has an open window to lead the west into a new era.  The window will not be open much longer and will shut hard in the event the U.S. collapses.  This is Putin's moment.  Will he lead?