In August this column ran a piece claiming that the Pacific Ocean was being poisoned by radioactive material escaping from Fukushima, two years after the devastating tsunami and meltdown at the Japanese nuclear facility. Three months later, shocking evidence points towards a calamity situation. Silence from the corporate media. 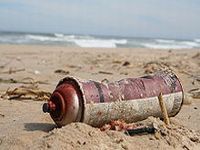 There is growing evidence coming from numerous reports aired on social networks and the so-called social media, among which is the article "Radioactive Water From Fukushima Is Systematically Poisoning The Entire Pacific Ocean" (*), which claimed that every day and for 750 days (now over 800) tonnes of toxic materials have been pouring into the Pacific Ocean.

The toxic substances were identified as Tritium, Cesium and Strontium, being carried far and wide by winds, rain and ocean currents, entering the food chain through seaweed and seafood, building up high levels of toxicity in the fish - and humans - at the top end of the consumption chain.

TEPCO, or Tokyo Electric Power Company, the operator of the plant, admitted in August that between twenty and forty trillion becquerels of radioactive material have entered the Pacific Ocean after a security barrier had been breached. The same operator admitted that in just one week, in August, levels of Caesium-134 rose by 90 times and Caesium-137 rose by 86 times.

Fresh research (**) provides a chilling reminder that this situation is serious, will not go away, is getting worse and cannot be swept under the carpet. This research points to "massive numbers" of sea creatures dying across the Pacific, and that high levels of Cesium-137 are present in "a very high percentage of fish" caught in this ocean "and sold in North America".

The research then moves on to refer to specific and unexplained incidents. For example, the unexplained death of starfish off Puget Sound off Canada. The animals seem to be melting, a phenomenon observed elsewhere in Canadian waters. Divers spoke of live creatures literally disintegrating in front of them, in "massive numbers".

On to British Columbia, where abnormal behavior and an unusually high death rate has been observed among killer whales. The vocal communication among the animals has ceased, and in the last two years, seven matriarchs have died.

An Australian traveler sailing from Japan to California, USA, referred that it appeared the entire ocean was dead. All he saw was a whale rolling helplessly in the sea with a tumour on its head, and "for 3,000 nautical miles there was nothing to be seen". No turtles, no sea birds, no dolphins, no sharks.

On to Alaska, where polar bears, seals and walruses have loss of fur and suffer from open sores on their skin. On to Southern California, where 45 per cent of sea lion pups have died, described by the National Oceanic and Atmospheric Administration as "an unusual mortality event".

Back up to Canada, where the sockeye salmon faces record low numbers, up across the entire west coast of Canada, where fish are dying from bleeding eyes, gills and bellies.

Back across the Ocean, where extremely high levels of Cesium-137 have been found between Hawaii and California. On a test made on 15 dead tuna, all 15 were found to be contaminated with radiation. Of the fish being sold to Canada, in 2012, the Vancouver Sun recorded the number of specimens testing positive for Cesium-137, namely:

Fukushima continues to leak, and leak at ever increasing rates and the latest prediction is that this contamination will continue until 2015, at the earliest. Until then, will the Pacific Ocean be poisoned beyond repair (if this has not happened already)? And when will the authorities explain to us what is happening? When our babies are born glowing bright green and blinking at us through seven eyes?