An Israeli bulldozer at the gate of a Bedouin cemetery at Al-Araqib in the Negev Desert advanced against children, injuring some of them. The source is credible, and historically accompanies its accusations with photographs. Where on this planet would a bulldozer be deployed to injure children at a cemetery? Why, Israel, where else? 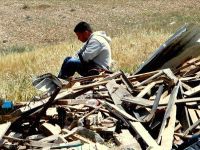 Here is the report sent to Pravda.Ru by a spokesperson of the Negev Bedouin, harassed by the Israeli authorities who destroy their homes and by the JNF, the Jewish National Fund, which is obsessed with planting trees on Bedouin grazing lands.

"It seemed that there were "red lines" even for the police brutality against the Bedouins of the Israeli Negev - while destroying homes that had no possibility for acquiring building permits, arresting people on their village lands in order to make room for JNF trees, beating activists who dared request to see the official papers allowing the brutality - all seemed to be "ok". But until today - even for the police - the cemetery and the people waiting in the cemetery for the police to leave - were off limits. No more.

" After destroying the tents of the village - yet again, the JNF (yes!) bulldozer approached the gate of the cemetery attempting to run it down and destroy it. This was too much for the village people, who are sitting in their community's cemetery, watching as their village is once more destroyed. As the bulldozer approached the gate, the people went to stop it with their bare hands. Several are injured, including children. They are being evacuated at this moment by ambulances.

"Do all you can to stop this horrible escalation of the treatment of the Arab citizens of Israel!!!" 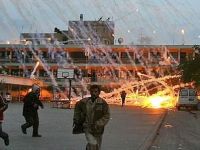 The police then entered the cemetery. Where else on Earth would you see a quasi-Government organization, in this case the JNF, backed up by the Israeli police, bulldozing children in a cemetery? Maybe only in Gaza, where international photographers caught Israel deploying phosphorous bombs against a school.

Why the Israeli authorities act in this way defies logic. Yet before anyone accuses the author of being anti-Semitic (a label which I have already proven to be as idiotic as it is unfounded, because Semitic refers to speakers of Semitic languages, including all Jews and Arabs), many NGOs inside Israel and several American Jewish organizations join the Bedouin in their fight (see petition below).

In 2005, the Jewish National Fund began a campaign of "Living Room" in the Negev, aiming to increase the Jewish population in the area by 500,000 by 2010; failing that, the figure was revised to 250,000 by 2013. Neither target was set in a process of consultation with the residents - Bedouin nomads who have resided in the Negev for hundreds of years.

The Grand Plan involves resettling Jews in the area so that they outnumber the Israeli Arabs living there, implementing a forestation plan to force the Arabs from their lands. The legal dispute to these lands is not settled, yet the JNF has already started destroying Arab villages and has begun planting pine trees.

Their homes destroyed, the Arabs have to live in makeshift huts, and then the authorities say they have no permission to live in these dwellings and therefore have to move on. Hundreds upon hundreds of old people, pregnant women and babies brave the elements as the Israeli bulldozers move in.

In a petition to the Israeli Government, several Jewish human rights organizations have taken up the Bedouin cause: "True sustainability is not about one national or ethnic group living at the expense of another. It does not mean doing injustice to one for the benefit of another; nor does it involve the exploitation of the limited resources of indigenous peoples living in the State of Israel. Rather, sustainability is about sharing resources equitably; otherwise, it becomes a fig leaf for entrenching ethnic discrimination".