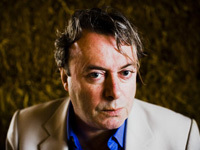 Having been recently diagnosed with cancer of the esophagus hardened atheist Christopher Hitchens, author of "God is not Great", may soon be going to meet his "Maker". The problem is that Hitchens doesn't believe in a spiritual Maker. He killed Him off years ago - or so he thinks.

Now he finds himself in a somewhat similar predicament as that of hardened killer Rocky Sullivan, played by James Gagney, in the 1938 movie "Angels with Dirty Faces". Rocky was a notorious criminal who, at the end of the film, is unrepentant and undaunted by the fact that he is about to be executed for his crimes. By the mercy of God, his life-time friend and priest Jerry Connolly (Pat O'Brien), is desperately tying to get him to "straighten [himself] out with God" before he dies. He also wants Rocky to go out a "coward" so that his admirers won't idolize him or see him as a role model or martyr. At first Rocky refuses to humble himself and show fear in the death chamber: "Your asking me to pull an act, turn yellow, so those kids will think I'm no good...You ask me to throw away the only thing I've got left...You ask me to crawl on my belly - the last thing I do in life...Nothing doing. You're asking too much".

Father Jerry then tells Rocky about a different kind of courage, "The kind that's well, that's born in heaven. Well, not the courage of heroics or bravado. The kind that you and I and God know about...I want you to let them down. You see, you've been a hero to these kids, and hundreds of others, all through your life - and now you're gonna be a glorified hero in death, and I want to prevent that, Rocky. They've got to despise your memory. They've got to be ashamed of you."

At the very last moment Rocky appears to change his mind and has to be dragged to the electric chair issuing heart-rending screams of pathetic cowardice. The viewer, however, is never told whether Rocky genuinely was afraid or if he did it for the Father and the boys. His true nature and motives are not revealed.

I suppose the same can be said of Christopher Hitchens. We may never know his true standing with God when he dies. What we do know, however, is that he is in a similar predicament as Rocky Sullivan. By the great grace of God he is now facing a dilemma that might not have presented itself - or at least not with such force - had he not been struck with cancer. Now he's playing for all the marbles. Will he hold steadfast to that human pride that for many years made him a hero in the eyes of the world's atheists or will he find it in himself to reach down and acknowledge to all humanity the truth that he knows about God before his time is up and God's mercy runs out? Perhaps this is the burning question facing all those who go through life trying to justify their sins. Unfortunately, in a world that has lost the sense of sin, many are not aware of it and many may not be as fortunate as Hitchens to receive the same stark reminder to heed the "voice of conscience" before it is too late. Here-in lies a lesson for us all to "stay awake" (Mark 13, 33).

When we tumble with the grip of dark forces and then start to defend our false obsessions and compulsions, we inevitably come to regard our conscience as an enemy. We then feel compelled to silence the "voice of conscience" - not just the one inside of us, but the one in other people, which can revive our own conscience with which we are at war. To the sinner living in denial, even a loving offer of help from, say, a Christian counselor, can feel like the most vile, abusive hatred. We see this every day, not just with militant atheists like Hitchens but with those for example, who present themselves as members of the pro-abortion and pro-homosexual lobby.

Whatever Hitchens decides, all true believers are definitely hoping and praying that, for his own sake and for the sake of others, he will confront his conscience and take the same leap of faith we all hope Rocky Sullivan took in the movies.