Terrorism: Whose Side is the West on??

Last Monday, 39 innocent people were murdered and over 70 were injured in Moscow, two days later a further 12 were murdered and 27 injured in Dagestan, all in terrorist attacks carried out by Islamic extremists, indiscriminate violence perpetrated without any reason against defenceless people going about their daily lives. However, the reaction from the western press is so shocking as to raise the question, Whose side are they on? 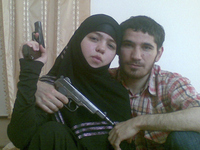 Terrorism: Whose Side is the West on??

For the UK’s The Guardian*, the attack seems to be almost justified, since it was in retaliation for a “murder” of poor Chechen boys innocently picking garlic in the forests near the village of Arshaty in Ingushetia, so poor that they only had wild garlic to eat (according to terrorist leader Doku Umarov), and the poor little boys in the forest, enjoying the countryside, were murdered by Russian special forces, and therefore, well…

Phrases such as “the misfortune of the four garlic pickers”, “the brutal actions of Russia’s security forces”, “Massacre in woods that brought war to Moscow's metro”, using sources such as “rights groups allege” shows that The Guardian newspaper has descended in a downward spiral from a quality independent source to yet another member of the assimilated press. How pathetic.

So what about a reference to the poor Russian civilians going to work at Park Kultury station and being blown up by some demented 17-year-old pig-faced sow from Dagestan, Dzhennet Abdurakhmanova (photo), married to the terrorist Umalat Magomedov? Both are seen brandishing weapons, after having met on the Internet. Hardly a poor little garlic picking paupers sob story is it? Or the 20-year-old Markha Ustarkhanova, Chechen psychopath, who perpetrated the massacre at Lubyanka?

Where are the words “massacre”, “misfortune”, “brutal”?

Then we have idiotic comments such as the one from a Kathryn Stoner-Weiss, deputy director and senior research scholar at the Center for Democracy, Development and the Rule of Law at Stanford University: “Putin’s democratic rollback”. What is this…lady…talking about? Vladimir Putin was democratically elected President twice by a huge majority, today enjoys an enviable popular support rate and refused to change the Constitution to stand for a third term as President, which he would have won.

The biscuit, however, has to go to Andrew C. Kuchins, senior fellow and director of the Russia and Eurasia program at the Center for Strategic and International Studies: “Putin has used terrorist attacks, most strikingly after Beslan in 2004, to centralize the political system and cast blame at the West”.

Or maybe to David Satter, senior fellow at the Hudson Institute, who claims that the poor little Chechens’ terrorist attacks at the Dubrovka Theater in 2002 and the school at Beslan in 2004 “were attempts by Chechen rebels to bring about negotiations”. So noble. Like suppose they had written an e-mail instead?

With people like these in charge of western institutions which purport to be leading media outlets and opinion makers, we see that the understanding of all things Russian is not only zero, but indeed is orchestrated by persons with a competence and cultural index of minus sixteen.

In one paragraph, how about the truth?

Namely, the Chechen people voted to remain within the Russian Federation in a free and fair democratic referendum in 2003. Over 95% of them. The vast majority of the citizens of Ingushetia, Dagestan and Chechnya do not support the terrorists because they do not represent any popular movement for freedom. They are common criminals and murderers. And those who blow themselves up will not go to Paradise. They will rot in Hell for the rest of eternity.

And Hell must be visited on these elements wherever they lie. No stone must be left unturned until the last of these sickening cockroaches is eliminated. These cowards must be exterminated like the vermin they are. The response must be implacable and unwavering, determined and resolute. These disgusting sub-human samples of excrement must be liquidated and destroyed. And so they shall be.

For those who support them, then maybe they should be destroyed as well.