The latest UN report spells an alarming tale of ineptitude both by the Afghan government and by the international community, which has seen the situation in Afghanistan deteriorate to the point that it faces a serious threat of catastrophic irreversibility. After thousands of civilian deaths, nearly 1,000 military fatalities, eight years and $ 250 bn. the country is teetering on the edge of a chasm. 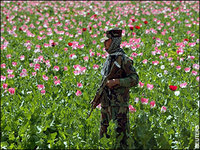 The UN Assistance Mission in Afghanistan (UNAMA) report, released on Monday minces no words, calling the situation “critical”, describing the Presidential election as “flawed”, referring to the “adverse effects of increased Taliban…attacks”, “insufficient resources”, “lack of coordination”, “lack of political readiness” which if not addressed and redressed, will lead not only to diminishing prospects of success but worse, “the deteriorating overall situation will become irreversible”.

After thousands of civilian deaths, nearly 1,000 military fatalities, eight years and $ 250 bn. spent, this report spells out an F minus for the strategists involved as the entire campaign lurches from disaster to calamity. In 2009, the number of incidents per month increased by 65% over the same period the preceding year to 1,244…monthly, not yearly, an average of 41.4 incidents per day.

Civilian casualties increased by 12% over 2008 while the influence of “insurgents” rises by the day to such an extent that it “posed obstacles to programme delivery”.

Therefore the high-level Afghanistan Conference in London on January 28 to discuss the agenda of the international community comes at a critical time in the history not only of Afghanistan but of the entire region. While the report focuses on the flaws and weaknesses which need to be corrected, it also states that there is no place to “abandon what has been achieved and what must now be built upon”.

In the report, which was delivered to the UNSC on Monday, Ban-Ki Moon states that “The situation cannot continue as is, if we are to succeed in Afghanistan. Unity of effort and greater attention to key priorities are now a sine qua non.” The Secretary-General goes on to state “There is a need for a change of mindset in the international community as well as in the Government of Afghanistan. Without that change, the prospects of success will diminish further”.

It is too late to question the policy adopted by the West against the USSR in the 1970s, when extremist anti-Soviet regimes were launched in Central Asia, which in turn morphed first into the Mujaheddin and later into the Taliban. It is too late to complain that the socially progressive regime in Kabul had turned that city into the Paris of the East and Afghanistan into one of the most socially advanced countries in the region and was promptly destroyed by a bunch of Medieval murderers pouring out of Pakistan’s madrassahs.

Today, the international community cannot afford to have a failed State in Afghanistan because the consequences would be too disastrous to contemplate, namely another safe haven for global terrorism, drugs and arms traffickers and a focal point for the most evil and demonic elements of society across the globe.

The Soviet Union tried to address such impending calamities through a policy of social development not only at home but abroad, providing education, providing public services and rewarding excellence. If the West had not sabotaged the model and sent numerous countries back to the Stone Age, most of the problems the world faces today would not exist. The bottom line continues to be: development.