A Florida doctor on trial for pledging to help al-Qaida had hoped to convince jurors when he testified that he did not know he had offered his medical expertise to the terror group. 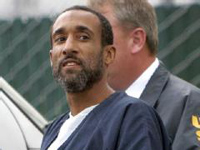 But the jury apparently did not believe him, and on Monday he was convicted of providing material support to terrorists by agreeing to treat injured al-Qaida fighters so they could return to Iraq to battle Americans.

Dr. Rafiq Abdus Sabir, 52, was convicted in Manhattan federal court after a three-week trial that featured not only testimony by him but also Ali Soufan, an FBI agent who posed as the al-Qaida recruiter in a sting operation that led to four arrests.

When the verdict was read, Sabir looked straight ahead. Later, as he was escorted from the courtroom, he waved to supporters, who said, "Stay strong."

Sabir's lawyer, Ed Wilford, said, "We are deeply disappointed in the verdict. It is another example of the erosion of constitutional rights we suffered post-9/11."

The charges against the Harlem-born Sabir, including conspiracy to provide material support to terrorists, carry a potential maximum sentence of 30 years in prison. Sentencing was set for Sept. 12.

The verdict came after jurors heard audio tapes of a May 2005 ceremony in a Bronx apartment in which Sabir and his best friend, Tariq Shah, a martial arts expert and jazz musician, pledged loyalty to al-Qaida and, the government alleged, Osama bin Laden, the AP reports.

The doctor claimed he thought the oath was a bayat -- a general Islamic declaration -- and only agreed to help treat his "brothers" out of his medical obligations to treat all people.

But prosectors questioned why Sabir did not realize or inquire who he was pledging allegiance to when al Qaeda was mentioned during the four-hour meeting at least 14 times and "Sheikh Osama" up to 10 times.

They said Sabir and his "brother in arms" Shah, a New York jazz musician and martial arts expert, long dreamed of fulfilling what they believed was their Muslim duty to help wage holy war against infidels.

The men offered themselves as a "package" to the undercover agent, prosecutors said, with Sabir providing his skills as an emergency room doctor and Shah training would-be fighters in hand-to-hand combat.

Farhane was sentenced in April to 13 years in prison and Shah and Brent will be sentenced in July, Reuters reports.