Hurricane Rita's march toward land sent hundreds of thousands of people fleeing the nation's fourth-largest city Houston in a frustratingly slow, bumper-to-bumper exodus. In all, nearly 2 million people along the Texas and Louisiana coasts were urged to get out of the way of Rita, a 400-mile-wide storm that weakened on Thursday from a top-of-the-scale Category 5 hurricane to a Category 4 as it swirled across the Gulf of Mexico. 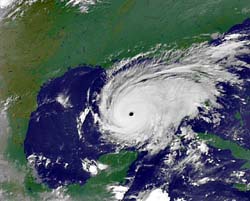 Rita also brought rain to already battered New Orleans, raising fears that the city's Katrina-damaged levees would fail and flood the city all over again. Late Thursday, the storm shifted slightly to the west, toward Texas, but the National Hurricane Center still predicted it would make landfall somewhere along a 350-mile stretch of the Texas and Louisiana coastline.

In Galveston - a city nearly wiped out by a hurricane a century ago - nursing homes and hospitals have been carefully, systematically evacuated. Buses have been provided for the indigent and immobile. For the first time in history, freeways leading north and west out of Houston were running in only one direction, although traffic was snarled with breakdowns and gasoline shortages. The National Guard, the military and the Federal Emergency Management Agency are all prepared. Environmentalists warned of the possibility of a toxic spill from the 87 chemical plants and petroleum installations that represent more than one-fourth of US refining capacity.

Hurricane Rita has the potential to flood an area almost twice the size of New Orleans when it reaches shore early Saturday, causing tens of billions of dollars in damage to the Houston metropolitan area and plunging another major Gulf Coast metropolis into disarray. That area is home to about 700,000 people, 15 percent of the metro population. It includes the Johnson Space Center, which sits about 20 miles southeast of downtown in a low-lying area threaded by bayous. NASA evacuated the space center Wednesday, shifting ground control over the International Space Station to a Russian space agency facility near Moscow.

Whenever a major hurricane makes landfall, the stretch of coast east of the storm's center is subject to the greatest surge of water, as the counterclockwise rotation of the cyclone combines with its forward motion to drive water ashore.
That makes a landfall around Freeport, Texas, about 40 miles southwest of Galveston, most threatening for the Houston area. It remains possible that Rita could come ashore that far down the Texas coast, but as of Thursday afternoon, the storm appeared more likely to focus its attack closer to the Texas-Louisiana line.

In the meantime, meteorologist Scott Stevens says Japan's Yakuza mafia used a Russian-made electromagnetic generator to cause Hurricane Katrina in a bid to avenge itself for the Hiroshima atom bomb attack - and that this technology will soon be wielded again to hit another U.S. city. Stevens, who is among several people to offer alternative and generally discounted theories for the storm that flooded New Orleans, says a little-known oversight in physical laws makes it possible to create and control storms - especially if you're armed with the Cold War-era weapon said to have been made by the Russians in 1976. Stevens became convinced of the existence of the Russian device when he observed an unusual Montana cold front in 2004.

Scientists discount Stevens' claims as ludicrous and say they run contrary to the second law of thermodynamics, that energy can be neither created nor destroyed. "I have been doing hurricane research for the better part of 20 years now, and there was nothing unusual to me about any of the satellite imagery of Katrina," said Rob Young, a hurricane expert at Western Carolina University in Cullowhee, N.C. "It's laughable to think it could have been manmade."