Rita strengthens into hurricane, lashes Florida with rain with tornados

About 500 buses have arrived in New Orleans to start another evacuation of those enthusiastic residents of the flooded city, who wished to return to their homes. Tropical Storm Rita has already lashed Florida with flooding rain, according to the US National Hurricane Center. 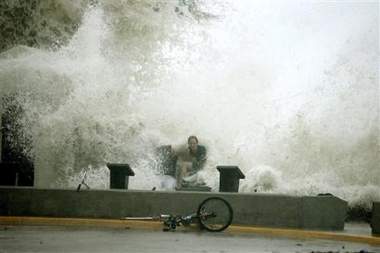 Thousands of coastal residents in Texas moved inland. While Hurricane Rita is forecast to land anywhere from Corpus Christi to Galveston, Texas, it may veer east and strike Louisiana's coast, the center said yesterday. Rita, the ninth named hurricane of the season, was about 95 miles (150 kilometers) west-southwest of Key West, Florida, as of 11 p.m. local time, the center said. The storm is moving west at about 13 mph, Bloomberg reports.

Over 136,000 people including 5,500 foreign tourists have been evacuated from the northern coastline of Cuba because of the powerful storm. Classes were stopped at local schools in Havana, stores and various institutions were closed.

Forecasters said Rita could intensify in the Gulf of Mexico into a Category 4 storm with winds of at least 131 mph (211 kph). The most likely destination by week's end was Texas, although Louisiana and northern Mexico were possibilities, according to the hurricane center. The center also said that Rita would bring heavy rain and strong wind across the entire coast, although northern provinces of Cuba would suffer most. Meteorologists said that Rita has already caused two tornados in Florida.

The US administration is watching the situation with Rita storm closely. President Bush said that the government was taking measures to be prepared for its possible consequences. "All up and down the coastline people are now preparing for what is anticipated to be another significant storm," Bush said. The president advised that federal and local authorities had already reported about their preparations to Rita's possible strike in the region, which had been previously devastated by Category 4 Katrina Hurricane.

Florida Gov. Jeb Bush said more than 2,000 Florida National Guard troops and dozens of law enforcement officers were ready to deal with the storm's aftermath, although it appeared the Keys were spared the storm's full fury.

Eager to show hands-on leadership after being criticized for a slow response to Katrina, Bush signed an emergency declaration for Florida, spoke with Texas Gov. Rick Perry about planning for the storm's landfall, and said military outfits are being removed from New Orleans to be out of Rita's path and ready to help with recovery, AP reports.

Meanwhile, American meteorologists are running out of names for tropical storms and hurricanes. Rita is the 17th named storm of the Atlantic hurricane season, making this the fourth-busiest season since record-keeping started in 1851. The record is 21 tropical storms in 1933. Six hurricanes have hit Florida in the last 13 months. There are only four names left in the forecasters' list this year: Stan, Tammy, Vince and Wilma. At the beginning of each Atlantic storm season, the center publishes a list of 21 storm names. They alternate male and female names in alphabetical order. The letters Q, U, X, Y and Z are skipped because not enough names start with those letters. In 1979 Atlantic male names were included, putting to an end the practice of naming hurricanes only after women. Should the Atlantic see more than 21 named storms “additional storms will take names from the Greek alphabet: Alpha, Beta, Gamma, Delta, and so on,” according to the National Hurricane Center website.

Hurricane names can be used repeatedly every seven years, with the exception for those, which caused major destruction and death toll. No other hurricane will ever be named as Katrina: this name has been deleted from meteorologists' lists for good. Katrina is not alone at this point: Andrew Hurricane will never make any news headlines either: the storm killed 23 in the south of Florida and 3 in Bahamas in 1992.

It is worthy of note that this is the first time since 1995's Hurricane Tanya that the storms, named in alphabetical order, have reached the letter "R." Hurricanes are measured on the five-step Saffir-Simpson scale. A tropical storm becomes a hurricane when winds reach 74 mph. A Category 2 storm has winds of at least 96 mph, a Category 3 has winds of at least 111 mph, and Category 4 hurricanes have winds of 131 mph.