A court of the Khabarovsk region of Russia sentenced a local resident, Sergei Doroshenko, to 18 years in jail for murdering his three-month-old son. 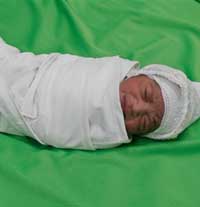 The baby was killed on July 30 2006 in an apartment block in the city of Khabarovsk. Doroshenko and his wife started fighting after they had taken a certain dose of alcohol. The man tried to hit his wife twice, but missed and incidentally punched their little son that was sleeping on mothers’ arms.

The baby started crying, which infuriated the father even more. The man hit the baby for the third time and broke his skull bone. The injury became lethal for the little boy.

When police officers came to Doroshenko’s apartment to arrest the child-killer, the man cowardly hid himself in a wardrobe. The man said during interrogation that he was blind drunk and could not control his actions.

Neither the father nor the mother of the killed child called the ambulance after the incident. The sight of the dying baby frightened Doroshenko’s sister who came into the apartment to try to pacify the fighting adults. The woman was shocked to see the severely wounded little child. She panicked, tried to ask the two drunk parents what happened to the baby and called the ambulance. It is worthy of note that the parents tried to convince the woman that the baby was fine and that there was no need in ER doctors to help him.

Criminal psychologists subsequently determined that Sergei Doroshenko was of sound mind when he committed the crime. The man will now have to spend 18 years in jail.