Terrorists today are becoming more and more inventive. They are doing their best to make their attacks sudden and unexpected. The most recent innovation the terrorist used in their attacks was a bicycle. 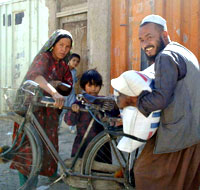 An improvised explosive device (IED), possibly bicycle-borne, detonated May 30 near the Athens home of Greek Culture Minister Giorgos Voulgarakis. No one was injured in the blast, which occurred just minutes before Voulgarakis was to pass by on his way to work. If indeed a bike was used, the case would be the latest example of the vehicle's use either as a bomb delivery mechanism -- or as a bomb itself.

In this case, the bicycle appears to have been the delivery mechanism, though some reports are saying the IED was planted beneath another car. The device, according to some Greek police officials, was strapped to a bicycle seat or concealed in a satchel that was then hung on a bicycle. The bike was then parked along the road approximately 70 yards from the Voulgarakis home. The bomb, believed to have contained the equivalent of about 4 ½ pounds of high explosives, detonated at 7:42 a.m. local time, three minutes before the minister's car would have passed by, damaging several cars in the area. Greek police believe the attackers mistook a passing car for the minister's and prematurely detonated the device by remote control.

Although Greek authorities were quick to blame left-wing militants for the attack, no group has claimed responsibility. Voulgarakis has drawn the ire of Greek leftists because he is perceived as not sufficiently anti-American. As the former minister of public order, however, he also likely has made other enemies.

In order to plant this device, the attackers had to circumvent the work of a Greek bomb disposal team, comprised of two officers and a bomb-sniffing dog, which is assigned with checking the street for bombs every morning before the minister departs for work. In this case, however, the IED was placed almost directly across from a vehicle belonging to the bomb disposal team. This suggests the attackers encased the IED in some kind of material to mask the scent of the explosives from the dogs, or they placed the device during the brief window between the bomb sweep and the approach of the target. It also is possible that, having become complacent with the routine of the daily sweep, the bomb disposal team missed the IED.

In many parts of the world, the ubiquitous bicycle arouses little suspicion, making it a not uncommon means of deploying IEDs. Just in the past month, bicycle bombs were used in Pakistan, injuring seven people, and in Sri Lanka, killing five. Although the bicycle possibly used in the latest attack would have been the bomb bearer, in some cases the bicycle tubing itself is packed with explosives, making the bike itself the bomb.

In cities where bicycles are used to deliver food and small packages, an IED can easily be concealed in a container and attached to the bike, and then parked just about anywhere. In some places, bicycles are used to haul heavy loads, providing the opportunity to conceal very large IEDs. The disadvantage to this method is that an unattended package on a bicycle could arouse suspicion before detonation, especially if competent security forces are present.

In these cases, an IED made from the bicycle itself can also be used. By packing the hollow frame with explosives that can be shaped, such as C4, a seemingly innocuous bicycle can be transformed into a lethal weapon, with the frame of the bicycle itself becoming shrapnel. Using such methods, a bicycle IED would be practically indistinguishable from an ordinary bicycle. The disadvantage of using this method is that the charge cannot be shaped, or directed toward the target unless the bicycle is placed against a barrier that would deflect the force of the blast in one direction.

Although there are conflicting reports as to the method of delivery of this latest bomb, the fact remains that bicycles are used in militant attacks in many parts of the world, meaning security forces should add them to the list of potential weapons.