Sheremetyevo Airport unable to provide flight security to its passengers

The Sheremetyevo International Airport released an official statement yesterday, in which the airport's administration set out its compassion to passengers of KMV Avia's Tu-204 jetliner, flight 3062, which nearly crashed on April 2nd, 2005 on the way to Moscow from Egypt. 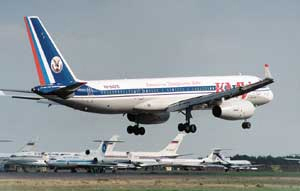 The airport's administration also said that the Sheremetyevo Airport is always prepared to render help to its passengers, although airport managers were not informed about the state of emergency on time. The statement also said that the KMV Avia airline informed the airport about the incident on board the Tu-204 liner long time after the plane landed at the airport.

Pravda.Ru published an interview with the chairwoman of the PR department of the Sheremetyevo International Airport, Angelina Matrosova, on Monday. The official said that all passengers, who suffered from the accident on board the liner, received psychological and medical aid at the airport. We put a more specific question to Mrs. Matrosova – how many people received help at the airport? The chairwoman of the Sheremetyevo's PR department hung up the telephone and did not wish to continue talking to the press. As it turns out from the airport's official statement, Mrs. Matrosova provided the false information to our newspaper.

A different source from the airport said: “A woman had a neck-bone fracture, for the plane was shaking very heavily. Some other passengers - there were 188 passengers on board in total - suffered from traumas too,” the source told RIA Novosti news agency.

According to the spokesperson for the airport, the passenger, who had the neck-bone fracture, was hospitalized, whereas other passengers received medical help at the Sheremetyevo-1 airport, where the plane landed.

The Sheremetyevo International Airport proved to be unable to elaborate a single line to inform passengers about its activities. It goes without saying that the words of compassion are important, even if people can hear them several days after a tragedy or an incident. However, the Sheremetyevo International Airport is obviously unable to prove all necessary resources, including medical ones, to guarantee flight security to passengers.

According to the official statement, the airport was informed about the accident on board the Tu-204 jetliner, long time after the aircraft landed at the airport. The statement suggests that the help for the passengers arrived late because of this factor as well.

However, Mrs. Matrosova said in her interview with Pravda.Ru that the help was given to passengers on time.

As it can be seen from RIA Novosti's message, the passenger with neck-bone fractures was hospitalized. It brings up the idea that an ambulance vehicle arrived to the plane soon after it landed. The airport administration was therefore aware of the situation. They could guess that other passengers needed psychological help too. The airport did not provide that help, though. The level of the airport's care for passengers leaves much to be desired. Passengers, in their turn, have to trust the airport that provides rather contradictory information. It is not ruled out, though, that the PR department of the airport was unable to define a single line, to which it is believed to stick to in such situations.

The unprofessional work of the airport and its PR departments causes damage to passengers, first and foremost. Will the Sheremetyevo International Airport pass a similar test in the event another state of emergency occurs?