Passengers of the crashing jetliner thanked for using the airline's services

Pravda.Ru has already reported about the state of emergency, which occurred on April 2nd on board the Tu-204 jetliner on its way from Egypt's Sharm El Sheikh to Moscow. We also wrote about the reaction that we received to our request to comment the situation: Angelina Matrosova, an official of the Sheremetyevo International Airport, obviously had little knowledge about the art of communication with the media. We herewith would like to publish a report about  the crashing airplane, as we promised before. 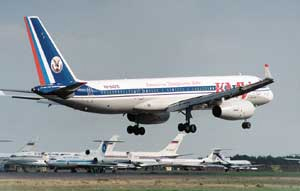 ”I was flying on board the Tu-204 plane, flight 3062. I was sitting in row 7. I could see one of the crewmembers taking a magazine from the shelf above my head. The man took the magazine during the 10th minute of the flight. The magazine was called “The defects registration journal.” A little bit earlier, when the liner was about to take off, the entire crew went to the center of the saloon, maybe, a little bit farther. I could see two other planes in the window: I started explaining it to my seven-year-old son that it was our turn to fly, and two other planes would follow us.

”As soon as we took off, the personnel started rushing about with the defects registration journal, which gave me a very bad feeling. After that, the plane started falling down all of a sudden. I may be wrong, but it was probably the captain of the aircraft, who was doing something in the middle of the saloon – apparently, a technical malfunction occurred in that place. At any rate, two people were staying there during the moment of the breakdown.

”It was a nightmare for us. There was an impression that the engines stopped working. We could hear something roaring slightly, as if it was somewhere afar. The aircraft was losing height very fast. It is hard for me to say, how many meters or even kilometers it took the plane to descend and how long it took to last. It seemed to be an eternity. Now I know, what people think, when they get ready to die, and when they have their family sitting right next to them. I was very scared. My child was weeping near me, but I could only hold him tight in my arms. I could hear him screaming for two days afterwards.

”The plane finally stopped shaking, but no one has ever explained anything to us, no one has apologized for the “technical inconvenience” either. As if it was not our business to know what was happening to the aircraft, if it was just downdraught or thunder front, whether the fall was connected with the fuss that the crewmembers caused after the plane took off.

”We were waiting for the horror to repeat for the rest of the flight. I asked the air hostess, if we were flying to Moscow or back to Egypt. “Why are you asking? Of course we are flying to Moscow,” she replied. I saw another air hostess a little bit later: her face was stained with blood and there was a big bruise on her cheek.

”There was another air hostess, a blond one: she was smiling and acting rather courageously throughout the whole flight. The bruised hostess was rushing up and down the isle, to the cockpit and back – she definitely needed help herself.  The only announcement that was made during the flight was: “Passengers of the second saloon need medical aid. There was another one made, though: “There won't be any hot meals served during the flight: the food is scattered.”

”I do not know, if the horrible incident was connected with technical drawbacks. However, it was clear that there was something wrong on board the plane - one could see it before the liner took off. No one asked us, if we wanted to become hostages of the Russian airline KMV Avia, which did not want to delay the flight for technical reasons, not to pay the fines to the Egyptian airport – it was most likely so.  They probably decided to repair the plane at Moscow's Sheremetyevo Airport.

”At the end of the day, they thanked us for flying KMV Avia and offered us to fly with them again. We never managed to receive any comments regarding the incident with the Tu-204 liner from “competent sources.” Everything was presented in a way as if nothing has happened. It is not ruled out, though, that it was simply a common thing to happen.

My child told me on the way from Sheremetyevo that he feared that the plane could crash in the mountains. “They are all edged and we could get scratched against the rocks.”