Spain is mourning victims of the deadly terrorist attack that occurred on one of the busiest streets in one of Europe's most beautiful cities during the peak of the holiday season. Innocent people were murdered by car-ramming - a way that terrorists have developed a fondness for lately. Previously, terrorists used this method for attacks in other major European cities - London, Paris, Berlin, Stockholm, Nice - all these cities have suffered from similar attacks. The terrorist attack in Spain was only a matter of time, director of the Center for Security Studies, Jose Julio Fernandez Rodriguez, told La Voz De Galicia Spanish newspaper. Another Spanish publication, El Periodico, reported that the Central Intelligence Agency of the United States (CIA) warned the police of Catalonia about the threat of terrorist attacks in the city two months ago. La Rambla Street, on which the minibus ploughed into people on August 17, was listed as a probable target. 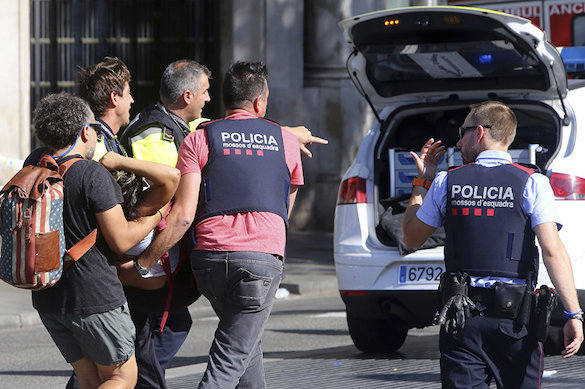 The method that terrorists used in their recent attack in Barcelona, is known as car-ramming. The largest car-ramming terrorist attack occurred in July 2016 in Nice, France, where terrorist Mohamed Boulele drove his truck to Promenade des Anglais (English Embankment) during festive fireworks, crushing 86 people on his way.

In December of the same year, Tunisian Anis Amri rammed a vehicle into a Christmas market in the center of Berlin , killing eleven people and injuring 56.

London has seen three car-ramming attacks. On March 22, 2017, a man named Khalid Masud drove into a crowd of passers-by on Westminster Bridge, and then crashed into the fence of the Palace of Westminster, stepped out of the car and fatally wounded a policeman near the British Parliament. As a result of the attack, five people were killed and 49 were injured. The terrorist himself was shot.

On June 3, a similar attack occurred on the London Bridge: eight people were killed, 48 were injured.

On the night of June 19, a van drove into a crowd of people near Finsbury Park in north London, killing one person and injuring ten. The driver of the van was detained. Prime Minister May called the detainee a lonesome terrorist.

On March 23 in Belgium, a French citizen was detained for trying to crush pedestrians with his car.

On April 7, in the center of Stockholm, a truck drove into a department store and killed four people. Fifteen others suffered injuries of varying degrees. The terrorist who used the hijacked car for the attack managed to escape, but later he was detained by the police. He was identified as 39-year-old origin of Uzbekistan, Rahmat Akilov, who came to Stockholm as a builder.

On June 19, a Renault Megane car packed with explosives and weapons (AK-47s and pistols), crashed into a gendarmerie car on the Champs Elysees in Paris. The attacker was killed. He was said to be a suicide bomber who tried to conduct a terrorist attack.

A week before the terrorist attack in Barcelona - on August 9 - a car crashed into a group of soldiers participating in the Sentinelle antiterrorist operation in a suburb of Paris, Levallois-Perret. Six people were injured, the condition of the three was called heavy. The attacker escaped from the crime scene, but was subsequently detained. He was identified as 37-year-old Algerian Hamu Benlatresh.

Experts note the growing popularity of the car-ramming method among Islamists and associate it with its availability. "Terrorists do not need much to kill people: they can use a truck, for example," Der Standard wrote.

At the same time, there are no protection against such threats. Predicting actions of this type is impossible, director of the Center for Security Studies, Jose Julio Fernandez Rodriguez believes.

In 2004, a major terrorist attack was conducted in Spain, when 191 people were killed at Atocha railway station in Madrid.