North Korea to start WWIII because of sanctions on sportswear?

As soon as the UN Security Council passed a resolution to tighten sanctions against North Korea, the latter launched a few short-range missiles towards the Sea of ​​Japan. What consequences may this entail for the DPRK? Pravda.Ru discussed the ongoing crisis on the Korean Peninsula with leading researcher at the Center for Korean Studies at the Institute of Far Eastern Studies, Yevgeny Kim. 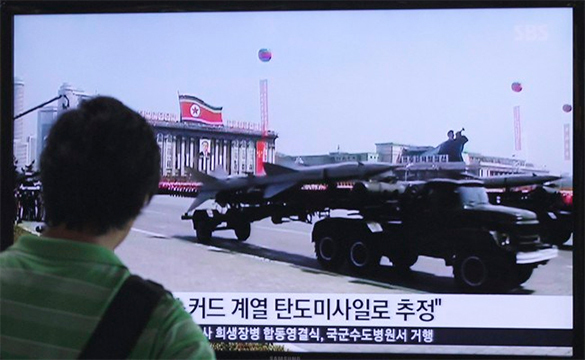 "The DPRK authorities made it clear for everyone that they would not refuse from their nuclear program. It is also obvious that the country is not going to step on the way of changes. What can North Korea do to respond to the new sanctions?"

"They may launch a satellite in April or May this year. In early May, North Korea is holding the Congress of the ruling Party of Korea for the first time in 36 years. Therefore, the DPRK authorities may consider a new program for the development of the country in the coming years."

"Why do you think Russia supported the new sanctions against North Korea?"

"Russia supported the new sanctions due to certain obligations that we have as a permanent member of the UN Security Council. The decision was also based on certain diplomatic combinations associated with Syria, European, Ukrainian affairs, etc. It was also a compromise that Russia made with the United States.

"Yet, I do not think that it was a successful move for Russia to make as the Americans will not take it into account. As a matter of fact, the UN Security Council resolution does not have a goal to contain the nuclear and missile programs - the prime goal of the resolution is to strike the economy of North Korea. The resolution, for example, has banned exports of coal in the quantities that North Korea could afford. Don't they use coal to build nuclear weapons or develop missile technologies? The document also banned imports and exports of sportswear. Does it have anything to do with the nuclear program?

"They also banned the sale of sports equipment worth more than 2,000 dollars, as well as luxury goods. They also suggest banning the supplies of aviation and rocket fuel. Who told them that North Korea was buying aviation and rocket fuel? At the very least, the fuel for the rocket that North Korea launched three years ago and a few weeks ago was produced at a chemical plant in North Korea - they do not need to buy it from anyone.

"Therefore, the sanctions will not work as they should. They will only exacerbate the state of affairs in the economy of the country. The Americans hope that it will lead to mass riots in the DPRK, that the people will rise to topple the government."

"Is such a reaction possible at all? Can the sanctions cause enough damage to the lives of the people of North Korea?"

"Let's look into the matter. They have banned sports equipment and sports clothing for recreational purposes, which means that all tourist centers that attract foreign tourists will suffer losses. Plus, South Korea shut down the Kaesong Industrial Complex. This complex used to bring up to 100 million dollars to the North. Given the fact that the CIA and the US provide for $44 billion for North Korea's GDP, then the amount of $100 million does not look like an amount that could crush the economy.

"The Americans wanted China to stop oil supplies to North Korea. There is no oil in the DPRK. The US also wanted all countries not to hire North Korean employees. In Russia, for example, there are tens of thousands of North Koreans working on construction sites, in agriculture and so on. They also work in China, Africa and in Asian countries.

"Do you think the multilateral negotiations for the North Korean nuclear program may resume some day?"

"The DPRK says it is ready, but the Americans, South Koreans and Japanese want the northerners to  reveal everything about the program first. Saddam Hussein showed everything to fend off accusations of weapons of mass destruction. The DPRK does not want to repeat the fate of Iraq.

"One needs the mandate of six-party talks for the denuclearization of the Korean Peninsula, not only North Korea. The US has recently deployed B-52 bombers in South Korea, and this aircraft is capable of carrying nuclear weapons. The North Carolina nuclear submarine is expected to arrive at the port of Pusan. The US and South Korea plan holding joint military drills, in which they will simulate the capture of command posts, as well as nuclear and missile centers in North Korea. These military exercises will be conducted to display direct aggression against the country. Yet, the whole world does not say a word about it. In this situation, North Korea has only one choice: they will continue developing missile and nuclear technologies."

"Is Japan going to do anything about it?"

"Shooting down a rocket, if it goes about the launch of a satellite, would be an act of aggression against another state. This is just a warning. If the North Korean rocket had flown in Japanese airspace at an altitude of 10-15 kilometers, it could have been regarded as violation of Japanese airspace. However, the rocket flew at an altitude of 70-80 kilometers in near space - this is not a violation of airspace of any country."