The world community again demonstrated unanimity in the face of North Korea's nuclear threat. After an atomic explosion at an underground test site on February 12th in North Korea, the UN Security Council began preparing new sanctions against the country. Russia shares the concerns of the U.S. and Japan over Pyongyang's actions that could undermine peace and stability in the region. 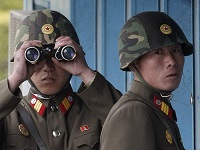 Moreover, China, North Korea's only ally, expressed its willingness to support tough sanctions against the North Korean regime. Another question is what will change after the next UN resolution condemning the missile and nuclear tests in the country. Kim Un Chin's regime rejected any resumption of the disarmament talks, accusing the U.S. and its allies of waging a war. Obviously, the anti-American propaganda of Pyongyang is largely intended for domestic consumption. Kim Un Chin's government traditionally uses it to distract people from the socio-economic problems.

For many years, we have been hearing repeated statements in the media about the readiness of the Armed North Korea to deliver a crushing blow to the U.S. and South Korea in case of aggression on their part. North Korea's nuclear tests also are not news.

North Korean military conducted nuclear tests in 2006 and 2009. It is assumed that a plutonium bomb was used for the first underground explosion. On October 9, 2006 the U.S. Geological Survey recorded a seismic shock of 4.2 on the Richter scale, thus confirming the fact of the testing of nuclear weapons.

The same day, the South Korean government called an emergency cabinet meeting, and the country's army was brought into high alert. On October 14, the UN Security Council condemned the nuclear tests conducted by North Korea "in flagrant disregard of the relevant resolutions." The new resolution imposes major restrictions for supply of military equipment to North Korean, including tanks, armored vehicles, helicopters and airplanes, etc. In May of 2009, Pyongyang tested an even more powerful nuclear bomb at the same test site. According to experts, the force of the underground explosion was 20 kilotons.

After coming to power in December of 2011 of the new North Korean leader Kim Jong-un, Washington and Tokyo brought up the possibility of resuming the six-party talks on the nuclear issue. A year ago, the leadership of the country has officially announced the end of nuclear testing in exchange for U.S. food aid. However, in April, the deal was canceled by the Americans unilaterally, after North Korea carried out another launch of a ballistic missile with a satellite. A new round of the crisis was caused by the fundamental differences between Washington and Pyongyang in the understanding of the agreements.

The DPRK leadership believes that a satellite launch attempt had nothing to do with missile tests, and the February agreement with the U.S. on the end of uranium enrichment, nuclear and missile tests and the provision of food aid to the country has not been violated. Pyongyang's reaction in response to denial of humanitarian aid was predictable: the North Korean authorities threatened Washington with "necessary punitive measures." In practice, this meant that very soon the world will know about new underground nuclear tests by North Korea.

In December of 2012, North Korea announced the completion of preparations for the next launch of missiles from satellites. On December 12, satellite "Kvanmenson-3" was launched. Japan until recently did not believe it was possible and prepared to shoot down a missile in the event of its deviations from the course. The unsuccessful rocket launches made a very negative impact on the image of Pyongyang in the region. At this time, tests of ballistic missiles capable of carrying a nuclear warhead caused even more concern over the ocean.

Despite numerous warnings and sanctions from the international community, on February 12 of this year, the DPRK made another underground nuclear explosion that exceeded the capacity of the previous ones two-fold. In response, the United States submitted a new resolution to the UN Security Council calling for the toughening of the sanctions against the North Korean regime. New restrictions may relate to illegal activities of diplomats of the country.

Diplomatic sources say that Russia would support the draft resolution (the vote in the Security Council will be held on Thursday). Meanwhile, the relations between Seoul and Pyongyang continued to deteriorate. On March 5 the information emerged that North Korea has threatened to break the truce of 1953. This step demonstrates the seriousness of the current international crisis over North Korea's nuclear program, which poses a potential threat of a renewed regional conflict.