Ukrainian President Petro Poroshenko continues claiming that the Ukrainian Armed Forces defend the country against the "Russian aggression." However, the real state of affairs in the east of Ukraine differs a lot from what Poroshenko says. Moreover, it is his own subordinates, who refute Poroshenko's official statements. 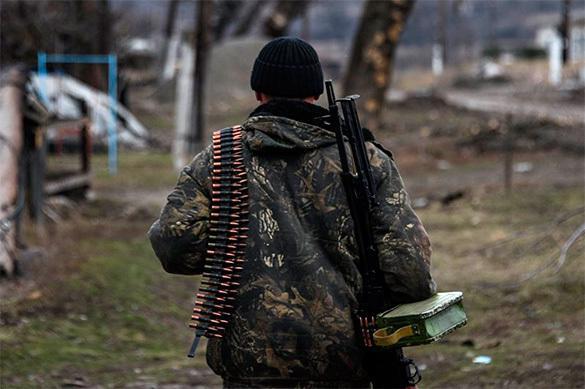 Deputy Minister of Defense of Ukraine, Igor Pavlovsky, publicly stated that the Armed Forces of Ukraine were not defending themselves - they were making an offensive on militia positions in the Donbas. "Today, no matter what, but inch by inch, step by step, our guys heroically move forward," Pavlovsky said in response to a request to comment on the situation in Avdeyevka, TASS reports.

An article on the website of Radio Liberty said that the escalation of the conflict in the Donbas occurred due to the so-called "creeping offensive" of the Armed Forces of Ukraine, when the military move step by step on the "gray", neutral zone towards militia positions.

US President Trump may strike Ukraine out of any sort of peace talks in an attempt to improve relations with Russia. At the same time, Ukrainian forces show their military might by going on the so-called "creeping offensive," the article says.

The Ukrainian forces are trying to seize as much territory as possible. At the same time, representatives of the Ukrainian authorities say that those steps allegedly do not jeopardize the peace process, nor do they contradict to the Minsk agreements.

At the end of the article, the author quotes Ukrainian commander Vyacheslav Vlasenko, who "boasted that if politicians couldn't bring an end to the war, his soldiers could recapture the occupied territories by force and be at the border with Russia in around six months. "It would cost many civilian lives," Vlasenko said.

The Washington Post also published an article about the current escalation in Ukraine. Journalists called on US President Donald Trump not to try to cooperate with Russian President Vladimir Putin, as Ukraine would not be the only defeated party as a result of such an alliance.

"Russia, predictably, blamed Ukraine for the fresh fighting, and Ukrainian commanders acknowledge that in recent weeks their forces had moved some positions forward in the no-man's land between the front lines. But Mr. Poroshenko, who was forced to break off his trip to Germany, has scant cause to seek another round of warfare in the east when the past two have led to crushing Ukrainian defeats," the article in The Washington Post says.

In a nutshell, everyone admits the offensive of the Ukrainian armed forces, but they only blame the Russian president for the escalation of the conflict in the Donbas.

The UN Security Council has condemned the fighting in Ukraine and urged to reinstate ceasefire in the conflict zone.

According to German publication Süddeutsche Zeitung that cites its own sources in the German government and reports of the OSCE mission, it is the Ukrainian military that are now trying to move the front line in their favor. German government circles believe that Kiev deliberately tries to increase tensions in a hope that the escalation of the conflict will help derail US President Donald Trump's plans to mitigate anti-Russian measures, the newspaper notes.

"Berlin understand that Poroshenko would do anything to prevent the lifting of sanctions from Russia," the article in the German publication says.