International community ignores use of chemical weapons in Syria

The Russian Defense Ministry has found evidence proving that ISIS terrorists use poisonous substances in Syria. According to the official spokesman for the department, Major-General Igor Konashenkov, a rapid identification of nine samples showed the presence of chlorine and white phosphorous in weapons. 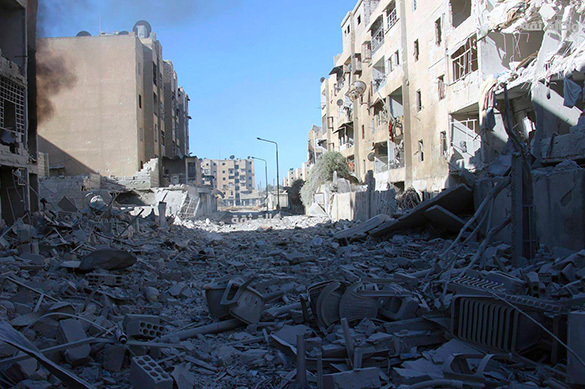 "Experts of the Russian Defense Ministry conducted a rapid identification of nine samples (bomb fragments, soil from the site of explosions) in quarter 1070 in south-western outskirts of Aleppo. The identification confirmed the presence of chlorine and white phosphorus in munitions," Konashenkov said, RIA Novosti reports.

Experts of the Scientific Center of Radiation, Chemical and Biological Protection continue collecting evidence to prove the use of chemical weapons in Aleppo by terrorists. According to the Defense Ministry representative, biological samples were also taken from four Syrian citizens, who suffered from the use of chemical weapons by militants. Their samples will be analyzed meticulously in a special laboratory in Russia.

According to Igor Konashenkov, despite the invitation to work together in Syria, the Organization for the Prohibition of Chemical Weapons (OPCW) has not sent its experts to Aleppo yet. "However, individual members of the OPCW still do not recognize the facts of the use of chemical weapons in Aleppo against the civilian population," concluded Konashenkov.

The Russian authorities specified that terrorists in Aleppo used chlorine against Syrian troops and the civilian population. The use of chemical weapons in Syria has been growing, but countries such as France and the UK ignore these crimes completely. "Or rather, they want to see the Syrian authorities guilty of those crimes," said Konashenkov.

On November 14, as many as 30 Syrian military men suffered from the use of chemical weapons. Dozens of people were hospitalized last week as a result of two chemical attacks, Russian Defense Minister Sergei Shoygu said.

Earlier, the head of the non-proliferation and arms control department of the Russian Foreign Ministry Mikhail Ulyanov said that terrorists of the Islamic State (banned in Russia) had gained access to chemical weapons production facilities.