Fascists lie as Putin is running out of patience

NATO Secretary General Jens Stoltenberg rebutted the recent statement from Russian President Vladimir Putin, who said that the Ukrainian army was based on a foreign NATO legion. Stoltenberg called Putin's statement "nonsensical." However, facts speak of the opposite. The purpose of NATO is to exacerbate the crisis in Ukraine. The Americans do not need the conflict in Ukraine to be settled peacefully. It appears that Putin is running out of patience. 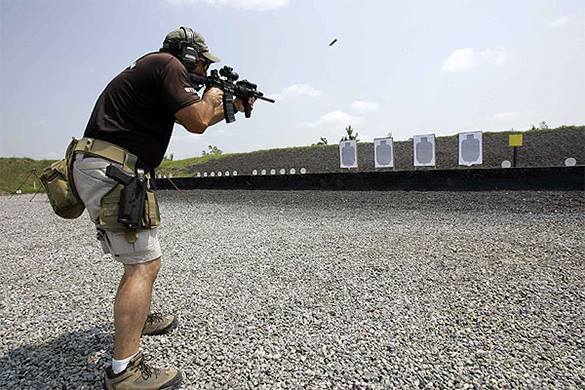 On Monday, at a meeting with St.Petersburg students, President Putin commented on the ongoing crisis in the east of Ukraine. "We often say: the Ukrainian army, the Ukrainian army. In fact, who is fighting there? There are official units of the armed forces there indeed, partly, but largely, there are so-called nationalist volunteer battalions. In fact, this is not an army, but a foreign legion, in this case, a NATO foreign legion, which, of course, does not pursue to protect Ukraine's national interests. They have different goals, and they are connected with objectives of geopolitical containment of Russia, which does not coincide with the national interests of the Ukrainian people," Russian President Vladimir Putin said.

NATO Secretary General responded the same day. "The statement that there is a NATO legion in Ukraine is nonsense. There is no NATO legion," Stoltenberg told reporters. "The foreign forces in Ukraine are Russian," he added.

Well, offense if the best defense, but let's look at the facts.

Employees of the Mariupol News Service, after the bombing of the city on January 24, recorded a soldier of the Ukrainian army, who spoke English while asking the cameraman not to show his face (video). In an interview with Russia Today TV channel, Nebojsa Malic, an expert on international affairs, said that "the soldier in the video could be a Canadian national, but for me he still sounds like an American." American journalist Steven Lendman pointed out an American accent of the  "Ukrainian soldier" in his article "Putin's Message to Washington on Ukraine." According to Nebojsa Malic, Western mercenaries in Ukraine play a consultive, managing role. US soldiers were spotted in the Donbass last spring, when Donetsk was a Ukrainian city.

Here is another fact. American General Ben Hodges distributed commemorative Pentagon tags to the wounded Ukrainian soldiers. Can a military official do that if this official represents a country, the authorities of which claim that their country is not involved in the conflict? Ben Hodges openly declared at the NATO-Ukraine meeting that the Pentagon would send American instructors to train soldiers of the Ukrainian army, the Defense News said. Earlier, the Congress approved the spending of the military department to train at least four battalions of the National Guard of Ukraine - $19 million.

US lawmakers passed the Ukraine Freedom Support Act, which stipulated for a possibility to provide military equipment and services to Ukraine, including anti-tank weapons, radar systems to combat artillery, tactical reconnaissance UAVs and secure communication systems. President Obama has not signed it yet, but Ukraine already receives weapons, including lethal weapons - both from NATO and decommissioned Soviet weapons from Poland, Bulgaria and other Eastern European countries of the alliance. This, of course, is being done secretly, but something leaks to the press. For example, on January 25, it was reported that Minister for Foreign Trade of Bosnia and Herzegovina Boris Tucic resigned protesting against the plans of his government to supply weapons to Ukraine. Bosnia and Herzegovina is not a member of NATO.

The presence of mercenaries can be seen in tactical schemes of warfare. "Ukrainian security forces shell squares - this is because many instructors from NATO countries came. Their tactic is to shell residential neighborhoods (video) so that they suffer least losses when they enter these quarters afterwards," deputy commander of the Donetsk militia Eduard Basurin said.

Russian President gives a perfectly correct assessment, Victoria Legranova, an expert on international security, told Pravda.Ru. "It is the headquarters of the American army that manage the Ukrainian army. Armed Ukrainian structures were  created in cooperation with private military companies and representatives of US secret services," said the expert. In addition to such private military companies as BlackWater and Academy, the CIA is actively involved in the process as well, conducting reconnaissance through tactical and strategic operational command centers. With the help of American instructors, Ukrainian servicemen learn to use  electronic tools and systems of electronic intelligence," said Victoria Legranova.

According to Legranova, the Russian Federation should categorize private military as organizations acting on behalf of the Government of the United States of America. "Because 90 percent of assignments and projects conducted by such companies as BlackWater are carried out on the orders from the US administration, - said the expert. - A large number of provocations is a brand identity of private military companies. In Kosovo, they would explode meeting places of Serbian representatives and Kosovo separatists. In Kosovo and Bosnia, they would kill  community leaders and representatives of religious organizations, for example, Orthodox priests, around whom people would unite. They will continue to stage such provocative actions in Ukraine. Their ultimate goal is to intensify the conflict and fighting, create chaos and drag Russia into this conflict."

This brings up the following conclusion. The situation in Ukraine will stabilize only when the West finds this war unprofitable. To make this happen, Russia should take  more stringent measures. Ukraine's population, especially mothers, who send their children to the front, will eventually start expressing their protest, and anti-war political structures will appear, says Victoria Legranova.

Steven Lendman shares a similar opinion. "Putin's patience is wearing thin. [...] They're obligated to respond. To protect Donbas residents. To combat Kiev aggression. Washington and Kiev partner in each other's crimes. One fascist regime supports another," the journalist wrote.