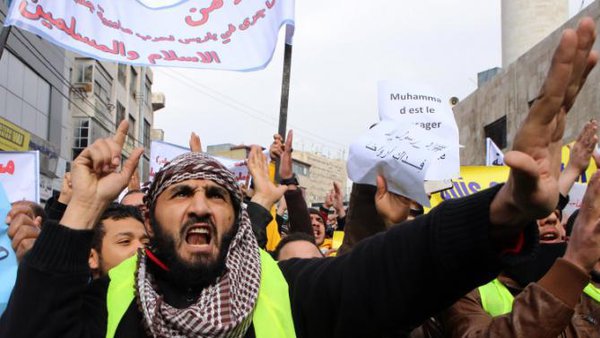 Those who believe Paris rally was in support of freedom and liberty need to answer the absence of even a small fraction of such emotional outburst when the 80 year old cartoonist Maurice Sinet was sacked by the Editor of none other than the very Charlie Hebdo magazine for not apologizing for quipping "He'll go a long way in life, that little lad" on learning the then President Sarkozy's son is converting to Judaism after his marriage to a Jewish girl ("L'affaire Sine"). Or, why Diedonne M'bala M'bala and footballer Nicolas Anelka didn't find a single French man or woman coming out on streets in their support when they were only recently banned for their innocent arms "quenelle" gesture by the very Government that now expresses outrage (M'Bala reportedly been arrested for his comments on Paris terror attack). Just because Jews decided the action and the comment were anti-Semitic, the three were made to suffer. Where did the famous French freedom and liberty vanish then? Why didn't French feel their freedoms curtailed? Why didn't they feel under attack from Jews or Judaism? How can freedom and liberty be partisan, allowing total protection of belief, speech and action to only one section of society while being used to humiliate, insult and torture some other repeatedly?

But then as the French philosopher Voltaire has very rightly said, "It is dangerous to be right in matters on which the established authorities are wrong."

Here is something more to consider. The very same day the Paris attacks happened there was a bomb attack on the office of the Colorado Chapter of the National Association for the Advancement of Colored People. It became neither a "terrorist" attack nor did the news splash across TV screens -- for the two simple reasons: attack didn't happen on any Jewish or White Christian property and that the FBI immediately determined the attacker to be a White male. Moral: Unlike Paris attacks, the attack on NAAP didn't have a strategic value for the over-arching objectives of the New Age Crusade against Islam.

And notice the Zionist hypocrisy emanating from the American soil: American Jewish Committee, taking the excuse of "free journalism," is angry over the blurred re-publication, post-Paris attacks, by some news media outlets of the cartoons that cost 17 lives! Real intention: Let the game continue as long as it is among goyim. It would have served AJC far better had it instead threatened these news outlets of committing "grave mistake" like the Israeli Prime Minister Benjamin Netanyahu forewarned France in case the French Parliament went ahead with vote on recognizing Palestine as a State. I wonder if Netanyahu insisted on coming to Paris rally just to whisper in President Hollande's ear "Got it, you fool!"

In his latest piece, 'The First Question to Ask After Any Terror Attack: Was It a False Flag?' George Washington has compiled a long list of false flag terror attacks sponsored by different governments. And true to this notion, within hours of the Paris terror attacks Pepe Escobar wrote 'Who profits from killing Charlie?' pointing out some usual suspicious false flag features that lead him to answer:

"Only those whose agenda is to demonize Islam.... French intel at least has concluded that this is no underwear bomber stunt. This is a pro job....

"And just as it happens, when the Empire of Chaos [USA] mostly needs it, evil "terra" once again rears its ugly head.

"[The dead in Paris attacks] were sacrificial lambs in a much nastier, gruesome, never-ending shadowplay."

Shadowplay of the Zionists-ruled USA.

Regardless of whether the Paris attacks were ISIS-sponsored (Government narrative) or a false-flag (see also e.g. here, here and here) the fact remains that Europe got its 911. With the French Government deploying thousands of soldiers and police for enhanced security in Paris the foundation laying for the European version of the US' Homeland Security has­ begun. The attack has heralded a great harvest time for political parties thriving on xenophobia, intelligence and security agencies and military-industrial complex across the Europe. It is only a matter of few short days before we would see passengers walking bare-feet and undergoing full-body scans at the European airports - of course, other than increased racist attacks on Muslims and their religious symbols. Like culture and technology transfer, it is transfer of pain from the US across the pond to the village cousins. US has a strategic plan for them but they first need to be turned into zombies, like post-911 Americans, for a bigger sacrifice. Watch out for the faint contours of this strategic plan that are likely to emerge at the upcoming "Summit on Countering Violent Extremism," President Obama has announced for 18 February. (Notice the words "Violent Extremism." Check the meaning and definition of extremism to know how democracy is turned to dictatorship where you won't be allowed to even criticize your elected governments, let alone calling a false flag a false flag!) The US is taking full command; Hollande or the German business community can't be allowed to torpedo Zionist-American Century objectives.

Europe has to fight the Zionist-American war

Months of US-led coalition airstrikes have not made any real dent on ISIS except to stop its onward whirlwind march. There is consensus among military and intelligence experts that defeating and destroying the ISIS would need ground forces. But putting ground forces again in the Middle East (or for that matter anywhere in the world) is a red flag to American population. More importantly, US economy is too sick to bear the costs of another full blown long war. US can provide cannons but it needs cannon fodder. That is where Europe's 911 enters the game. With the surcharged Islamophobia on sway across the Europe both at Government and public levels, the US now have millions of voluntary force at its disposal ready to fight and finance its march toward the Greater Middle East and North Africa. After all, who fought the Crusades? Not the Americans.

However, we could see the plot getting recast and taking a whole new shape and meaning if Strobe Talbot's recent threat to Russia, issued just days before Paris attacks, materializes. In his short (279-worded) blog piece in Reuters, Talbot, a former US deputy secretary of state in the Bill Clinton administration, doesn't mince words to threaten Russia of the launch of the third phase of Chechen insurgency in 2015, "which, in turn, could be the death knell of the Russian Federation in its current borders." Without any inhibitions he goes ahead to hint at "outside support for Islamic radicalism in the Caucasus." In plain language, as a political analyst wrote, Talbot is talking of the US reactivating insurgency in the Muslim Caucasus to bleed and dismember Russia.

Apparently Talbot did not have the inkling of the coming Paris attacks that seemingly have the potential to bear on the calculus of the American strategy against ISIS and Russia. If the deployment of its aircraft carrier to Gulf region just announced by the French Government and security measures proposed by David Cameroon are any clue it would seem that Europe is folding up sleeves, domestically and externally, for a full charge on the ISIS. Couple it with renewed Chechen insurgency we could see Europe and Russia fighting a common enemy. Will that make any positive difference in the current downslide of Europe-Russia relations over Ukraine? Likely yes, but only if Europe fights its war on ISIS independent of and outside the US umbrella, which demands individual economic-crisis stricken European nations assert over the pro-US Brussels. In the unlikely situation should that happen, it could be a limited war with the limited objective of defeating the ISIS. Over the long run such an entante between Europe and Russia has the potential to flower into the Berlin-Moscow-Beijing new world order.

Closer to the reality, however, is that Brussels would not ditch the US because it is too heavily and deeply invested in the Zionist-US strategy for global power and anti-Putin Russia plans.  Therefore, the more likely scenario is that while Russia will fight its own war in Caucasus, Europe will join the US vigorously, providing men and materials, first against the ISIS and later, in the hope of post-Putin Kremlin, to take on Russia - either, and preferably, through regime change or, worse comes to worse, war. Imagine the world-after that would be - a truly Zionist-American global empire with:

● Russia getting fully integrated with, rather being part of, the West;

● Israel achieving its dream goal of Greater Israel in a sea of surrounding ruins;

● Turkey getting more than its wish -- not just the membership but full merger with the EU and lost sovereignty! and

● China becoming a 'game in the cage' for the West.

That, of course, presupposes God having washed off His hands this planet and leaving us mere mortal at the mercy of Zionist-US cabal.