Marital happiness depends, sometimes, on the racial purity of the lovers. This is the message that the citizen Baruch Marzel sent to Israeli supermodel Bar Rafaeli, who plans to marry the great Leonardo Di Caprio.  "Not by chance you were born Jewish, he said."  Does Baruch live among the Taliban of Afghanistan or does he sympathize with Iran's ayatollahs? Neither one nor the other. Baruch is a Zionist colonist living in the occupied territories of Palestine and serves in the organization Lehava. That, in Christian, means flame, and in the original acronym: To Prevent Assimilation in the Holy Land. 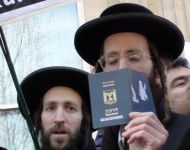 As a good Zionist, Baruch argues that it is not enough to be an Israeli citizen. It is necessary to be, above all, a good Jew. Therefore, the diva will have to think twice, because the union with the hero of Titanic could "damage" as he said future generations having mixed her blood with that of a 'gentile' (not Jewish).

One moment ... In what other circumstances of contemporary history was there something similar?  But if the tempting analogy with Nazism might sound anti-Semitic, oblivous of DNA, let's accept that in Israel the formula was discovered to differentiate pure blood from impure blood.

Absurdities, which in addition to being an obsession of some extremists, are consistent with the official policy of a state that has no constitution and encourages, deliberately, the conceptual gap between nationality and citizenship. Some Jewish thinkers brag on the Declaration of Independence of Israel, which in 1948 established respect for "... the complete social and political equality of all citizens without distinction of religion, race or sex."

In practice, the reality is different. In the absence of separation between state and religion, the Israeli citizenship card is not enough to sleep together forever. Only an Orthodox rabbi, an imam, or priest recognized by the State, can offer legal marriages. It, therefore is convenient, that the DNA of the couple are genuinely Israeli Jews.

And Lehava so what?   Does this organization not personify (along with the Zionist state) conclusive proof that the fundamentalist gangsters who rule Israel are pushing the faith of the Jews in a quagmire of confusion, atrocities and violations?

Not by chance you were born Jewish. Lehava strives to provide assistance to Jewish women who maintain relationships with Gentiles (especially when it comes to Arab men) to prevent marriages from being completed. And if couples do not agree, they travel to Cyprus, which has become the Las Vegas of Israel.

Sociologist Sara Stricker investigated that between 150 and 200 couples travel monthly to Cyprus from Israel.  Since according to international law, Israel should recognize marriages performed abroad. But, as Striker said, 63 years after the founding of the state, "... Israel has not declared whether it wants to be a Jewish state in accordance with the columns of filament (the commandments of Jewish religion) or a Western secular democracy."

Zionist propaganda identifies Israel as the most modern and democratic state in the Middle East. But what decisions on the other side of justice are taken into account for personal circumstances? Marriage, divorce or death are treated in Israel in absolutely sectarian terms.

On the other hand, Zionism does not care to explain why modern Israel is also the only one in the Western world in which there are only religious and not civil marriages. Or why not recognize marriages between Jews and Muslims or Christians, or between Jews and atheists?

In July 2005, the Knesset (Israeli parliament) decided to grant citizenship to Palestinians married to Israeli citizens, if the men were at least 35 years, and if the women were older than 25.  Good resource for practical purposes. For this way, only children born to Jewish parents are obliged to perform military service for two years, and we'll see later if they are Jewish enough to marry in Israel.

If a Mexican who lives in Israel is converted to Judaism, they can acquire citizenship at the time of their conversion. But if Mexico (or any other country) regulates that Jews cannot become citizens under the same conditions as others, Zionist experts in ethics, altruism and morality put the signature that it will be seen as a test of anti-Semitism.