Whither India and Pakistan? 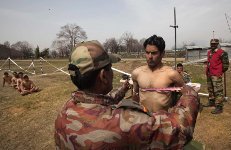 With the modernization of their armed forces, both India and Pakistan are again locked into a military lockjaw that may ultimately lead to that fatal embrace - given the new developments on the sub-continent such as the setting up of an Indian Air Force base in Tajikistan. Except that now there is no turning away from good neighborliness and the unpleasant realities of forever having to stare at each other - be it from field binoculars or the look-down facility  offered by reconnaissance airplanes and spy satellites.

Not too long ago, the deposed former Prime Minister of Pakistan, Zulfikar Ali Bhutto, sought to unlock his nation from the permanent hostility of the Indo-Pakistani embrace  after his dream of a secular and democratic Pakistan had been resoundingly rejected by everyone of note in that ill-starred country. He now turned the eyes of the Pakistani nation towards the Muslim world where Pakistan was respected and looked up to as a natural leader of great energy and vision.

Pakistan thereafter became an Islamic republic with Islam enshrined as the State religion in its very Constitution. Bhutto now focused his eyes on creating the only platform that could yet enable Pakistan to secure a place on the world map - on the fragile Pakistani economy- that could not yet free itself from American largesse and the resultant interference in Pakistani foreign policy.

Pakistan may well have become a great Islamic nation because the entire Muslim world was a ready receptacle for Bhutto's grand vision - even willing to pay for it without recompense- unlike those hated Americans whose influence in Pakistani affairs was finally to lead Bhutto to his grave.

Had Pakistan finally managed to separate itself from its permanent engagement with India, it may well have become a stable and prosperous country. Bhutto was even ready to put the Kashmir issue on the backburner to attain that end. Indeed, India too could have benefited immensely from Bhutto's vision and secured its own development budget against the periodic imbalances caused by unpredictable military expenditures. Alas, that dispensation was not to be and the deadlock between the two neighbors continues to this day.

Perhaps, India too could have resiled and retreated from its cousin across the border. Surely, India has more in common with the Buddhist countries of Thailand, the Koreas, Vietnam and Cambodia than an Islamic Pakistan that openly emphasizes its religious and cultural differences with India! Even in lowly neighboring Bangladesh, there are periodic outbursts of anti-Indian sentiment voiced vociferously and zealously by large sections of the populace who threaten to march to New Delhi to do justice to their Islamic forebears and heritage.

Then, too, most Muslims outside India believe Hindus to be idolatrous and regard Hinduism to be an unworthy religion. This is the mindset in much of the Islamic world and it is reflected in the refusal of Saudi Arabia to allot jobs to Hindus even when they are well-qualified.  Yet no Indian government has taken up serious issue with this valid concern because it has a large, established and vociferous Muslim minority within its own borders. This is the permanent and surreal tragedy of the Indian republic from which there seems to be no real escape!

However, it is the bonhomie and conviviality of Indo-Pakistani diplomacy that tell a different tale, no less sordid in other aspects.   After the periodic bloodletting on their borders, both India and Pakistan send their seasoned and topmost diplomats for parleys, negotiations and Confidence Building Measures (CBMs). Hospitality is shared, pleasantries exchanged and a flurry of diplomatic memos is passed between peers who have illustrious lineages, expensive foreign education and sartorial elegance that would put British royalty to shame. And, what's more, they like each other's company!

Yet, curiously enough, nothing concrete or substantial has emerged from this decades-long diplomatic endeavor between India and Pakistan though both sides express full satisfaction at the pace and seriousness of the dialogue undertaken by their diplomats. Diplomatic parleys are buttressed by Indo-Pakistani cricket tours where the very decency and civility of the game create feelings of camaraderie and brotherhood so that all loose talk of Kashmir is drowned out in the resounding din of adulating crowds who by now can judge each bowler or batsman on his own merits - be he Indian or Pakistani!  In brief, Indo-Pakistani diplomacy and cricket have survived the British Raj on the sub-continent!

However, it is the occasional and unexpected act of resentment by some lowly official in India or Pakistan that shows the hardening of attitudes on both sides of the border. When a former Prime Minister of Pakistan is snubbed by his generals who refuse to meet a visiting Indian premier, or indeed when an Indian ex-Prime Minister is not given deferential treatment worthy of his status by officials at the Wagah border checkpoint, the state of Indo-Pakistani relations begins to be seen in its true perspective.

For most Indians and Pakistanis, there can be no half-war, half-peace daily bombarded as they are by images of violence perpetrated by the other side - on TV, radio and the print media. Yet most maintain a complacent, even indifferent, attitude to the reality of Indo-Pakistani confrontation as they are caught in the daily toil of earning a livelihood. Until the demagogue and politician again take center stage at public meetings and exhort the crowds to commit greater acts of desperation and frenzy - and violence! That is the saga of Indo-Pakistani affairs as they stand now!

KAMAL WADHWA has studied economics and political science at Albright College in Reading, Pennsylvania. He is now a freelance writer and journalist based in Mumbai. He can be reached at [email protected]