Egyptian President Mohammed Morsi ratified the new constitution, approved at the referendum on December15 and 22. The new Constitution of Egypt has already come into force. There has been a lot of controversy around the new basic law mainly due to the fact that the Constitution is based on Sharia law. This does not seem strange enough, if you look at who is perturbed and why. 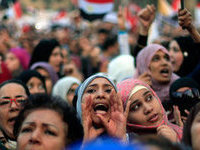 The referendum held in Egypt supported the draft of the new Constitution, developed by Islamists. The turnout made up 39, 2 percent. The draft Constitution was supported by 63.8 percent of voters, 36.2 percent voted against it, according to the Central Election Commission of Egypt. The West estimates Morsi's success as a contradictory phenomenon. On the one hand, it is clear that the president relies on his broad representation, which includes the support of the army and security forces. On the other hand, Morsi's excessive activity on the international scene that may not coincide with "directives" from the West, as well as the essence of his Islamist regime, causes reasons for distrust.

Therefore, it was announced that the new constitution is based on Sharia, which threatens secular achievements of Egypt. Back in 1971, Hosni Mubarak also declared Islam as a state religion. It was clearly written in Article 2 that the principles of Sharia were the main source of legislation. In addition, the West is perfectly fine with the Wahhabi kingdom of Saudi Arabia, where there is no Constitution at all. Furthermore, the West does not mind moderate Islamist leaders of Turkey being former members of the "Muslim Brotherhood." A lot of controversy has been caused over the possibility for Islamic religious institution Al-Azhar to control the lawmaking process to be able to reject the bills contrary to Islam. One should carefully read the new Constitution, which in paragraph 4 states that the institution has only a consultative and advisory vote.

Some also claimed that the law was not published, that the referendum was not controlled by the judiciary, and that secular forces did not take part in its development. This is not true to fact. The text of the Constitution was published on December 9th with an English translation. In addition, anyone could read the text at any poll station prior to casting their ballots. As for secular forces, they boycotted the process themselves.

"The referendum was held under the full control of the judiciary. The claims saying that there was no judicial monitoring are not true to fact. Complaints have not been confirmed not confirmed," a representative of the CEC said. Why would one believe the Western media that say that 90% of judges refused to perform their duties? The leader of the "Muslim Brotherhood" Mohammed Badie said quite sensible words about the Egyptians who should "start a revival of the country of free will ... men, women, Muslims and Christians."

Indeed, the new Constitution in Paragraph 3 ensures the rights and protection of minorities, including Coptic Christians, who make up 10% of Egypt's population, and recognize that their sacred canons are crucial for lawmaking of those communities. Thus, no one under the Constitution can endorse any Sharia laws on Coptic Christians. In any case, the new Constitution provides for the establishment of a democratic, civil society, rather than a military or religious regime. For some reason, the Christian Democrats, who stay in power in Germany, do not raise any objections with anyone, although their charter also provides for the use of the postulates of the Christian faith in the structure of the state.

Russia added some gloating to criticism from the West: "We warned you!" The West is unhappy that it could not lead the revolutionary movement in Egypt. Western officials did not listen to their Russian counterparts when they talked about the dangers of Islamic radicalization of the Middle East.

Meanwhile, the majority of Egyptians support the Constitution. The people have little interest in political confrontation. People are sick and tired of war, they all want stability. The main achievement of the revolution - to limit the powers of the president to two terms - is written in the Constitution.

Now, with the adoption of the new constitution, Egypt will set a date for new parliamentary elections within two months. Most likely, Muslim Brotherhood will win the vote. Again, this is not news. The "brothers" enjoy respected in many parts of the country; they are very well organized. Before the elections, the legislative authority of the Parliament will be attached to the Shura Council. Representatives of Islamist parties and movements took two-thirds of the seats in the body. Morsi appointed 90 people for remaining seats. This body includes representatives of 17 liberal and secular non-Islamic parties, as well as Copts and scholars from Al-Azhar, the world's largest Islamic University.

Egypt urgently needs to take care of its economy, Prime Minister Hisham Qandil said, commenting on the results of the referendum. He stressed that it was highly important to return foreign investors in the Egyptian market, and recover revenues from tourism, which "will help maintain foreign exchange reserves and reduce the budget deficit."

In June 2012, the budget deficit reached 11% of Egypt's gross domestic product, according to the IMF. Egypt's public debt made up 70% of GDP, which is a lot for a developing country. On Monday, Standard & Poor's rating agency downgraded the sovereign rating of Egypt. The country has oil and gas reserves, but their export is unlikely to replace the dividend from private and corporate foreign investment. The Egyptian authorities have already responded to the outflow of capital by setting limits on the export of foreign currency over the level of 10,000 U.S. dollars. This is not a new measure in the world. Argentina still uses it; Russia used it in the late 1980s.