Iran blames foreign presence for insecurity in the Persian Gulf

The presence of Western forces in the Persian Gulf is the cause of the prevailing insecurity, said Iranian Defense Minister General Ahmad Vahidion on Saturday (01). According to the military chief, Iran believes that the military agreements signed between the United States and "certain countries in the region," that he abstained from identifying, "endanger regional security."

Real regional security only will be specified through the cooperation of the countries in the region, General Vahidi declared to the official news agency, IRNA.

Additionally, he announced that "soon we will reveal the latest achievements in manufacturing missiles and naval teams."

Another military source, days ago, announced that the Islamic Republic of Iran reached the autarchy in means of supply and teams for their armed forces.

According to official media, 50 percent of academic research in Persian scientific centers are dedicated to increasing the country's defensive capabilities.

Weeks ago, General Vahidi revealed that the drone launched by Lebanese Hizbullah that flew over Israel for half an hour in the middle of last October was manufactured in their country by their technicians

A senior Iranian commander says the United States is not capable of military engagement with Iran in the Persian Gulf and this is why it has resorted to sanctions.

"The reason why Americans have resorted to economic sanctions and mischief is that they cannot take advantage of military leverage. If [global] arrogance and the US could achieve their goals through military action, they would have certainly done that," said Commander of Islamic Revolution Guard Corps (IRGC) Navy Rear Admiral Ali Fadavi.

The Persian Gulf is congested, and its entrance is constricted so badly that literally, large ships have to pass through the Strait of Hormuz one by one, literally "single-file."   Any attempts against Iran would most certainly be highly deadly to any aggressor foolish or arrogant enough to attempt it. 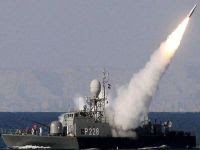