Maritime Force of the Iranian Army in international waters

The Commander of the Army Naval Force of the Islamic Republic of Iran, Habibolá Sayari, has stated that the Iranian Army Naval Force plans to incorporate new surface and subsurface vessels in the near future into its naval potential.

The Iranian Army Maritime Force is responsible for ensuring the safety of ships of all sorts, which circulate along the commercial sea lanes of the country. "Currently, naval piracy has  turned into real terrorism, supported by those who pursue their own interests and benefits," he said.

Also, Sayaria assures that the Persian Maritime Force has escorted up to 1,500 commercial vessels and oil tankers in recent years, and guaranteed the safety of many others in international waters.

On the other hand, one of the priorities of the Army Naval Force of the Islamic Republic of Iran in national and international waters is to fly the flag of Iran.

Another key aspect of the presence of our ships in transnational waters is to transmit the message of peace and friendship of the Iranian people to all regional and transregional countries and to show the scientific and technical capacity of our country.

"The world must know that the Maritime Force of the Army of Iran, despite western sanctions, is a pioneer in the construction of submarines and related equipment," continued the commander.

To paraphrase the Supreme Leader of Iran, Ayatollah Seyed Ali Khamenei, he indicated that it is essential to expand the presence of Persian naval forces in the open waters, since all countries have important interests and strategic interests in these common waters.

"We do not support any armed conflict," he concluded, "we do not have any intention of violating territorial or sea borders of any country.  Nevertheless, we will keep on sailing in the free and open waters and making our presence clear to all. 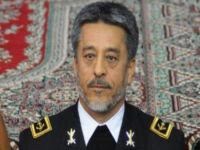