Syria/Libya: What is really going on?

The NATO/FUKUS Axis has lost control of the situation in Libya and Syria, after unleashing a massive terrorist attack in both countries, using foreigners armed by the west and digging up trouble among disaffected elements with axes to grind. The mainstream media has ominously gone silent since Houla was outed as another western mail-order massacre... 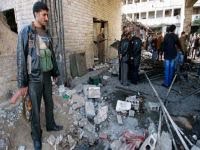 The truth of the matter is that inside Syria, as was the case in Libya, crimes against humanity are being perpetrated by the terrorist forces unleashed by the FUKUS Axis - France, the UK and US. These include disaffected internal elements with axes to grind among the populations with endemic questions to resolve against the leading groups, foreign mercenaries and Al-Qaeda elements working for the West.

As in Libya, such elements are being used to create humanitarian catastrophes which can then be blamed on the Assad government in false flag events - to date they have not worked simply because Libya was an eye-opener and the alternative media are alerted to their demonic schemes.

Such was the case several months back with the smuggling of chemical weapons from Libya to the Turkish border to be used inside Syria - an attempt outed in this column before the stunt could be pulled off. After that, numerous terrorist elements have been shipped by the FUKUS Axis to Turkey and then on into Syria, while alternative media sources are facing a massive bombardment of cyber terrorist attacks.

The latest escapade was this weekend, when, according to Syrian Army sources, Turkish helicopters flew over Syrian airspace looking for survivors of an FSA (terrorist) attack which had failed. The presence among these FSA sources of around a dozen Turks has been confirmed by several sources - this is not the first time that reports of Turkish (NATO) troops have been made inside Syria.

To the credit of the Syrian Armed Forces, fighting a heroic winning battle for their President against this demonic scourge (as we saw in Libya), the northern frontier with Turkey and the western frontier with Lebanon are being well defended and, deprived of new sources of equipment from their western paymasters, the Syrian terrorists are reeling as areas infested by this filth are sterilised.

As in other theaters, the problem is not Sunnis and Shia, it is posed rather by fanatical Wahhabist elements, as we saw in Chechnya. Take Houla for instance, where the massacre was blamed on the Syrian Government forces by a lying and irresponsible western media and the cynical forces pulling their strings, in turn controlling the terrorists who perpetrated it to create a false flag event justifying a humanitarian" invasion based on a devil-you-do, devil-you-don't approach (if the Government perpetrated it, then the invasion is justified; if the Government did not, then it has lost control, cannot protect the citizens and the invasion is justified: heads I win, tails you lose).

The ones who committed the massacre of Houla were elements of the Ar-Rastan, the Al-Farouk brigade of the so-called Free Syrian Army, led by Abdul Razak Tlass. Where is the process for his extradition to the ICC? Where is the process for the terrorist leader Saad Hariri, head of the treacherous Future Movement (Tayyar al-Mustabbal), whose Wahhabists took part in the massacre? Those massacred were Allawites, close to the government.

The Russians knew what was going on, why didn't Clinton? Why didn't Hague? Why didn't the French, UK and US? Why is the FUKUS intelligence so... mucked up?

So what exactly has the FUKUS started up in Syria, and how much of this was planned to spin out of control to justify some sort of an intervention within or outside the auspices of the UNO?

And why is the mainstream media so quiet about Libya, where al-Qaeda and NATO are now apparently fighting each other in some areas while the loyalist heroic Green Resistance Army has conquered the south of Libya and is making increasingly successful incursions into the north, where there is today hardly a town or city without conflict. Four of the generals commanding the terrorist forces against Gaddafi have been captured, and all have links to al-Qaeda, having admitted they are in the pay of the CIA.

Now ladies and gentlemen, this being the case, is anyone surprised?