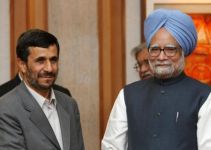 On Monday, Iran and India chose to deepen ties and the extension of cooperation between the two countries in various fields.

Ahmadinejad highlighted the deep relationships, friendship, and brotherhood between the two nations and then noted that "Undoubtedly, through closer bilateral cooperation between Tehran and New Delhi, good progress in relations will be attained."

He similarly argued that raising the level of ties and promoting bilateral cooperation will help both countries to establish sustainable peace and security at the regional and global levels.

In this regard, he expressed his hope that through increased contacts and consultations between authorities, the level of joint relations will rise in different fields of science, technology, commerce, economics and energy.

Meanwhile, the Indian Prime Minister said that New Delhi called for cementing its ties with Tehran, as he said, "There are numerous areas in different economic, commercial, and technological sectors, as well as  scientific cooperation for both countries.

It is recalled that bilateral trade between Tehran and New Delhi is estimated at 13.6 billion dollars. Also, 12% of India's imported oil comes from the South Asian country Iran.