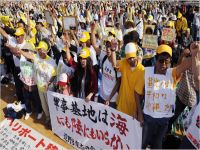 Over 90,000 Japanese demonstrated to remove bases

The U.S. military presence in Japan acquires special relevance recently due to proposals by Washington to reinstall a base on the island of Okinawa and indecision about Tokyo.

According to various data, not even the recent visit to this island by prime minister Yoshihiko Noda has achieved consensus between the two parties, despite a bilateral pact that was in effect, signed in 2006.

But the strongest opposition comes from people's organizations and even local civil servants, who together demand the closure of U.S. military installations.

Associations such as "No Military Bases in Japan," in the country denounce that "there are 135 U.S. bases with about 54,000 soldiers," of which 75 percent are concentrated in Okinawa.

For others, and this is the case of the governor of Yamaguchi, Sakinari Nii, it is unacceptable to transport these settlements to another territory of the country due to the risks, ailments and discomfort that it generates among the population.

Since the end of the Second World War, the United States has occupied large areas of Japanese territory, and only in 1972 gave a part of Okinawa to the authorities in Tokyo.

"These bases, declared the National Movement against such centers, cause serious problems in living conditions, destroy the environment and cause accidents and crimes."

Similarly, the Japanese government has not managed to limit the activities of Washington for the extraterritorial perks granted by agreements signed under imposition since 1950, they added.

Figures released in this sense specify that the Japanese pay additional costs for the realignment of military installations of the United States for nearly $26 billion.

On the other hand, both Tokyo and Washington maintain under strict secrecy information about the deposits of nuclear weapons in Okinawa and the logistical support system that allows them to control vast air space in Asia.

It is worth pointing out, according to anti-war sources in Japan, that even U.S. lawmakers Rom Paul and Dennis Kucinich admit there is a serious financial problem involving the aforementioned bases.

Kucinich, quoted in the media, states that "We do not have the money to police the world and we should stop pretending that we do."

The debate has now stalled, at least officially, and especially affects those more than one and a half million inhabitants of Okinawa, the scene of one of the bloodiest battles of the last world conflagration.