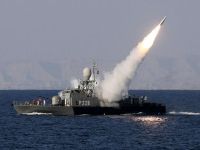 Iranian Army Commander, Major General Ataollah Salehi, said Monday that Iran's Navy has the ability to extend its presence to the Atlantic Ocean.

"Today the Iranian Navy has the ability to expand its presence to the Atlantic Ocean beyond the Gulf of Aden, the Mediterranean Sea, the Suez Canal, north of the Indian Ocean and Red Sea," Salehi said.

"This shows the power of Iran and the complete preparation of the Iranian navy," he added.

Citing the recent maneuvers of the navy, "Velayat 90," on December 24 last year, the Iranian commander said the move was very important and demonstrated the power and security of the Islamic Republic of Iran.
The maneuvers have used different classes of submarines, including Tareq and Qadir, and the newer system of land-sea and torpedoes.

In recent years, Iran has made significant progress in the defense sector, and has achieved self-sufficiency in the production of military equipment and systems.