Back-door games of Iran and Britain 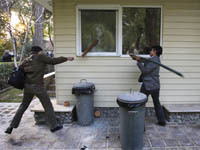 The relations between Iran and Britain have sharply deteriorated. On November 29 a crowd of students attacked the British Embassy in Tehran in response to the new British sanctions against the Islamic Republic. London is threatening the Iranians with new actions.

The new stage of complications between the two countries began after November 9, when a report was published by the International Atomic Energy Agency (IAEA) on Iran's nuclear program. It said that the Islamic Republic, at least until 2003, had worked on nuclear weapons, and such activities may not be finished until now.

Following the publication of the report, the UK government introduced additional financial sanctions against Iran. They provide for the termination of any relationship with the credit institutions of the Islamic Republic. Until now, the British did not undertake anything like that. Such unilateral moves were made only by the U.S., which, unlike Britain, does not even have diplomatic relations with Iran.

Iran decided to retaliate. The Parliament voted to decrease the level of relations with Great Britain to the level of charges d'affaires. The British ambassador was expelled to his home country. However, this was not all. The news that came from Tehran on November 29 can greatly exacerbate Iran's relations not only with Britain, but with the West in general.

Radical students stormed the British embassy in Tehran. Some of them said that this way they marked the anniversary of the death of an Israeli nuclear scientist under mysterious circumstances. Someone was unhappy with the new sanctions. Someone remembered that the British raised the writer Salman Rushdie cursed in Iran to the rank of a knight. Others tore portraits of Queen Elizabeth II, recalling that in the first half of the twentieth century Iran was actually dependent on the British nation.

As a result two buildings were attacked. In the main office of the Embassy the British flag was foiled and the Iranian flag was hoisted in its place. Employees of the diplomatic missions had to evacuate with the help of the police. In the other building six Britons were blocked, the crowd tore up secret documents and threw them into the street. Eventually, the police took the building by storm, and the British were released.

The police acted decisively at the building of the Embassy as well. They cleared the area in front of the building by force, using batons and tear gas. Several people were slightly injured and at least 12 were detained. The Iranian Foreign Ministry issued a special statement. "Ministry of Foreign Affairs regrets that the protests have led to inappropriate actions. We are prepared to ensure the safety and security of the diplomats and diplomatic facilities," said the department in its statement.

In turn, head of the British Foreign Office William Hague said that it could not be said that six Britons were held hostage. However, steps have been taken. On November 30 first the evacuation of the employees of the British embassy in Tehran was announced, followed by a complete closure of the Embassy.

Meanwhile, statements poured in from around the world condemning the actions of the demonstrators, including from all 15 member countries of the UN Security Council.

"Iran is responsible for the protection of diplomatic missions in the country and their employees. We call on Iran to respect its international obligations, to condemn the incident, punish those responsible and take steps to ensure that such incidents do not recur in any British Embassy or other Embassies in Iran," said the U.S. administration. The comment of the European Union was similar.

"These actions of the crowd of protesters that were committed in violation of the universally recognized norms of international law are unacceptable and deserve condemnation. We support the British diplomats. We hope that the Iranian authorities take necessary measures to restore order without delay, investigate the incident and prevent recurrence of such incidents," noted, in turn, the Russian Foreign Ministry.

Meanwhile, Iranian Parliament Speaker Ali Larijani has decided to justify the actions of the authorities. "Hasty actions of the Security Council condemning the students' actions have been taken to cover the previous crimes of America and Britain, while the police are doing everything possible to keep the peace. These subtle actions will lead to instability in the global sense," he said.

Will the recent developments in Tehran lead to tightening of the sanctions against Iran? Does the UK have leverage in this situation? Sergei Demidenko, an expert on Middle East with the Institute of Strategic Studies and Analysis answered these questions in an interview with "Pravda.Ru".

"The British Embassy was attacked just as the British Embassy, ​​and not as a collective symbol of the West. There has been a long covert struggle between the Iranians and the British at the level of diplomats and intelligence. What's really going on is hard to say, but most likely both the U.S. and British secret services work in Iran, and the latter can work more effectively than their overseas counterparts.

"There is no smoke without fire. When in 2005 there was unrest among the Arabs in the Iranian province of Khuzestan, Tehran accused Britain of their organization. Similarly, "the hand of London" was seen during the unrest in the Iranian capital four years later.

"This has to do with current affairs, rather than with the difficult history of the Iranian-British relations. Yes, in the first half of the twentieth century the British occupied part of Persia, but the Iranians are a young nation. Most of them do not remember any occupation. Historical grievances are virtually forgotten, and all the talk about a rematch is started for the sake of the current political goals.

"Does England have leverage on Iran? Some, and it is sanctions and the threat of military force. However, all these things are done more with an eye to the future. It is impossible today to scare Iran to such an extent that it will immediately begin to fulfill all requirements of the West. So the efforts of the Englishmen are rather focused on economic, political, and religious undermining of Iran. For example, the relations between people of different faiths in the country leave much to be desired.

"It is also important to undermine Iran's position in the international arena. And it's already done. The "Arab Revolution" is largely directed against Tehran. This line will continue."