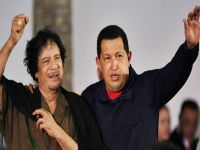 Subject: "ATTACK ON VENEZUELAN DIPLOMATIC RESIDENCE IN TRIPOLI IS PERNICIOUS AND SHAMELESS EVIL".

Humanity lives today in an interdependent and interconnected world where peaceful and fair interaction is imperative. A grave threat to all of us nowadays is the scourge of the desperate thirsts by big powers to control world resources, particularly oil that manifests itself in various forms of violence, including mindless terrorism.

To start with, the current situation in Libya with NATO (North Atlantic Treaty Organisation) leading a heinous campaign including carpet bombing, crusade attacks, terrorizing innocent people and shedding blood, constitute a form of injustice that cannot be tolerated in our modern civilized world.

We are living witnesses to the NATO creation and backing of al-qaeda terrorists in Libya, killing anyone who has black skin. They tell the world that they are killing Gaddafi Mercenaries, while in actual fact, they are Libyans.

Terrorism is established upon destruction of properties such as foreign embassies, factories, farms, places of worship, educational institutions, hospitals, airports and the like. Those who commit these barbaric acts are criminals, and they are not protecting civilians. The activities of NATO/al-qaeda Terrorists in Libya, to say the least are despicable.

However, the ugliest face of terrorism is that which is established in the name of democracy, under United Nations cover. Bombing embassies or destroying non-military installations or attempting to assassinate a sitting head of state is no democracy, and is unacceptable. Killing people, in any place and with any kind of weapons, including Cruisse missiles, drone attacks, depleted uranium, napalm and cluster bombs, long-range missiles, earth quake weapons carried out by any Institution hiding behind the façade of United Nations, country or individuals is condemned. It makes no difference whether such mass destruction happens in Hiroshima, Nagasaki, Iraq, Afghanistan, Palestine, Haiti, Sudan and Libya.

With the above, we share with the civilized world the feelings of revulsion, horror and shock over the terrorist attacks that ripped through the diplomatic residence of the Ambassador of the Bolivarian Republic of Venezuela in Tripoli: looting, inflicting heavy damage and attempting to kill the Ambassador, His Excellency Afif Tajeldine.

The Hugo Chavez International Foundation for Peace, Friendship and Solidarity (HCI-FPFS) condemns in the strongest terms these acts of terrorism premeditated to target diplomatic missions and any other innocent people, for whatever reason or motivation, and under whatever form or manifestation. These barbaric acts have no justification whatsoever and must be condemned and prevented at all cost by every responsible member of civilized society.

We share the embarrassment for ransacking and looting everything in the Venezuelan diplomatic compound. This is a cowardly act. Crusaders always attack soft targets when they lose on the battlefield.

It must be noted here that since the beginning of the current criminal and terror campaign against the Libyan people, in February, the mercenary British Special Forces aided by the al-qaeda terrorist outfit (or the proxy TNC) determined to destroy the statue of President Hugo Chavez, at the Hugo Chavez Olympic Stadium in Benghazi.

All good people ought to be united against all those who terrorize the innocents, and those who permit the killing of non-combatants without a justifiable reason. We call upon the United Nations to apprehend the true perpetrators of these crimes, as well as those who aid and abet them through incitement, recruiting, training, arming, financing or other support.

We extend our solidarity to the People's President, His Excellency Dr. Hugo Chavez, the Government and people of Venezuela.

We have consistently condemned terrorism, particularly state sponsored terrorism in all forms and under all circumstances, and we reiterate this unequivocal position.

The Hugo Chavez International Foundation for Peace, Friendship and Solidarity (HCI-FPFS) strictly condemns the use of violence against innocent lives. There is no justification for NATO/al-qaeda terrorism in Libya. Targeting civilians' life and property through carpet bombing, cruise missiles, drone attacks, or any other method of attack is evil.

President of the Hugo Chavez International Foundation for Peace, Friendship and Solidarity (HCI-FPFS)

For and on behalf of the Hugo Chavez International Foundation for Peace, Friendship and Solidarity (HCI-FPFS).