The West wants large Arab states to stop their existence 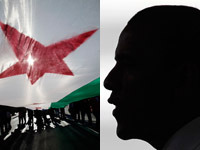 United States opposed the territorial integrity of Syria. On June 24, 2011 the U.S. State Department announced a protest against the deployment of the Syrian troops in the north. In recent weeks in some areas the situation has been getting out of control of Damascus and the opposition has hung Turkish flags.

This is another proof that the West is deliberately rocking the "Syrian boat." This may lead to irreversible consequences including the liquidation of Syria as an independent state.

The worst case scenario can be implemented in case of not so much the overthrowing, but the weakening of the Assad regime. After all, Syria is a unique and, at the same time, one of the most complex countries in the region in terms of ethnicities and confessions.

Over 80 percent of Syrians are Arabs. Approximately nine percent (according to other sources - 10) are Kurds, who are mostly a minority. Turkmens claim that they account for three to six percent of the Syrian population. Syrian Druse make up three percent. The shares of the Armenians, Assyrians, and Circassians account for one, 0.5 and 0.3 percent, respectively.

Nearly three-quarters of the population of Syria (73 percent) are Sunni Muslims. 16 percent are Shiite and close to them Alawite and Ismaili (over half are Alawite whose share in the Syrian population is 11 - 13 percent), 10 percent are Christians (half - Orthodox, 18 percent - Catholics, etc.) and approximately one per cent is Yezidis.

Bashar Assad's regime has plenty of weaknesses. Alawite minority enjoys special privileges in power. Since Assad's coming to power, Alawites dominate the country's leadership. For example, they basically form the officer corps. All of this causes resentment of the Sunni majority, many of whose members believe Alawite to be a sect that has no relation to Islam.

When the current president married a Sunni representative, political analysts interpreted this as an attempt to weld together the two most influential groups in the country. But, as practice shows, Alawites still hold key positions in politics and economics, which angers the Sunni.

In the case of democratization desired by the West, Assad's position would shake noticeably. Indeed, in this case, the privileged Alawite minority, on which it rests, would inevitably lose its former influence. They are well aware of this and do not intend to give up their positions, especially as long as Assad is more or less able to carry out the bond between them, the Christians, and the Druse. In turn, the Islamists from the Sunni do not intend to give up.

In any case, further escalation will inevitably affect the fate of the Christian minorities. As follows from the examples of Iraq and Egypt, when the situation is exacerbated they find themselves between the hammer and anvil.

In this regard, attention should be paid to the position of the Druse. Despite their small numbers, their views can swing the balance in one direction or another. So far they have been cautious. This position has to do with the fact that Damascus is trying to maintain a stable relationship with their leaders.

However, the Assad regime cannot be sure of their unconditional support. It is no coincidence that they are now heavily engaged in the processing of the Israeli secret service, ensuring their opposition to Assad. Recently, journalists "scared away" a strange opposition gathering of the representatives of the Syrian Druse in Austria. Representatives of Israel took upon themselves the role of the mediators.

Also read: Arabs stand up against supremacy of the West

Most of the Israeli Druse who serve on SWAT teams are in a privileged position. According to Syrian sources, their representatives actively promote anti-government actions among their Syrian brethren. There is no doubt that at least some of them in case of adverse developments in Syria would oppose Assad.

Another weakness of Damascus is the Kurdish issue, which is acute enough, and there is no doubt that in the event of further deterioration the Kurds would say their weighty word against the unity with Syria. The thoughts and intentions of most of them are focused on their own independent state. The processes of further isolation of Iraqi Kurdistan also impact the situation.

If we add to this a difficult economic situation in the country, it would make the ground for anti-government protests in Syria look very serious. The situation is not limited to a simple division of the country, which will cease to exist as a whole and is in danger of becoming an arena of endless and bloody clashes.

The tragedy of the situation is that, unlike the Druse, who live in the south, and Kurds who live in the north, representatives of other ethnic and religious groups often do not have clearly defined areas. For example, in many cities the Sunnis live next to Alawites and Christians. Even Latakia that was the capital of Alawite is now populated not only by them.

If the showdown "the Syrian way" goes too far, the "peaceful split" of the country would not work. There is a danger that the situation would develop according to the "Baghdad" scenario, where the conflict will result in endless succession of collisions.

Do the West and Israel not understand it, maintaining a policy of "democratization"? In particular, representatives of Tel Aviv strongly suggest that they have nothing to do with it and that instability in Syria may cause additional and unnecessary escalation at Israel's borders.

However, both Israel and the West act consciously in terms of Syria. No wonder the Israeli foreign minister Avigdor Lieberman complained that the international community reacts too weakly to the Syrian aggravation.

In the case of the dissolution of Syria as a unified state and instability of its ruins, Israel would not lose anything. On the contrary, the presence of al-Assad, as we know, does not guarantee Israel the absence of disturbances on its borders. The last two attempts of the Palestinians to break into Golan Heights occupied by Israelis have led to numerous deaths.

The overthrow of Assad would lead to a situation where, at least temporarily, Damascus will not qualify for the return of the Golan Heights. Syrians engaged in slaughtering each other simply would not have time for it. In fact, here are parallels with Iraq, which earlier played a major role in the Arab world. Now the unity of this country is very relative, and even theoretically it cannot threaten the pro-Western Gulf monarchies and Israel. The presence of the occupying forces does not stop the Iraqi Shiites and Sunnis from regular clashes.

As for Syria, by overthrowing al-Assad, it kills several birds with one stone. First, it is the main ally of Iran. Second, the regime change in Syria should radically change the balance of power in neighboring Lebanon which is increasingly falling under the influence of the radical organization "Hezbollah" that is in a state of war with the Israelis. After all, according to the latter, the Lebanese radicals have been using Syria as their rear base. However, with the fall of Assad all these advantages will be negated.

Khalid Aliyas, a representative of the Committee in support of Libya and Syria, said in the interview with Pravda.ru that the "plan of ​​the foreign backstage extends much wider than the destruction of Iraq and Syria. In essence, the same situation is observed in Libya, that the West seeks to break into parts, in Sudan, and even in Egypt. They want the major Arab states to cease their existence, replacing them by small areas that would infinitely fight among themselves. And under the guise the West would satisfy its own selfish interests."

Obviously, it is easier to dictate conditions to small entities, including terms on oil and gas exploration. In other words, it is very likely that the West has taken a deliberate policy to destroy the embryo of the Arab-Muslim state. In the process of the collapse of the colonial system, the Western powers laid a powerful bomb under the foundation of the Arab unity, creating territories many of which did not exist in the defined boundaries. Now it seems they have chosen the path of further fragmentation.