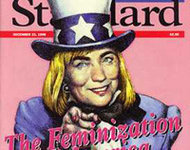 American feminists are going to help to emancipate "the oppressed women of the East." In the West people have been accustomed to their bizarre statements. One day they demand a law allowing walking topless through the streets of the cities, next day they declare a war on urinals in the men's toilets that in some way infringe upon their rights.

This time the matter is much more serious. On March 30, some American media outlets spread information that feminists will move their activities to the countries where women are supposedly subject to constant humiliation by men. The purpose of it is to help them get emancipated. The bravest of the fighters for women's rights will travel to those countries. It is worth mentioning that they will be doing it, according to U.S. sources, with direct support from the Department of State.

Despite the fact that this statement was published on the eve of April 1, the above information is not a joke. It is significant that human rights advocates have joined the "protection of women" movement. For example, Priyanka Motaparti of Human Rights Watch tirelessly states that "without the emancipation of women it is impossible to move towards true democracy".

Western media have joined the process. The French Le Monde says that women need the support of democrats worldwide, particularly the informational support, because they not only struggle with the authoritarian political regime, but also challenge the masculine, dominant order based on the inequality, whose stability until recently was sanctioned by traditions and religion.

What made Western feminists turn their gaze to the East? One of the reasons is a significant participation of women in Arab revolutions.

However, a question arises: how justified and effective such efforts are? The process of emancipation of women in East Central Asian republics in the Soviet period was delayed for many years. Visiting Communists would stage mass burning of burkas in the area. Yet, as soon as they would leave, everything would return to normal. This was not done by Basmachi. Often, women wore burkas by choice, without waiting for the orders of their fathers, brothers and husbands, many of whom held important positions in the Communist leadership.

Even many years later women in Central Asia could not be considered equal to men in terms of Western values. However, when in Rome, do what Romans do. Is everything really that bad in Muslim families?

For example, Western and Israeli media reported that the first group of Egyptian feminists tried to conduct a mini-rally at the legendary El-Tahrir Square in Cairo on March 8, demanding to improve their status and equality with men.

However, it all ended very sadly, with a mass brawl with the macho-Islamists. 18 most active Egyptian women were detained by the Egyptian armed forces that came to disperse the fight.

However, judging from the information of the human rights organization Amnesty International, the military did it in order to personally deal with the feminists.

According to her, the soldiers were torturing the detainees throughout the day on March 9. They were beaten, stripped naked and tortured with electric shocks. Women were forced to undergo humiliating "virginity tests", and were threatened with the charges of prostitution in case of confirmation that they have had sexual contact with men.

Then things took a bad turn: according to the human rights defenders, some of the detainees were found not to be virgins, and were subjected to further torture. After the overthrow of Mubarak government the power in Egypt is in the hands of the military. No matter how long Amnesty International tried to prosecute the "perpetrators of inhumane and barbaric treatment of women," nothing has changed.

There were other limited efforts of liberation of the women of the East. However, in Afghanistan, they resulted in a very sad development for local women.

There is no guarantee that as a result this "protection" of women's rights will not be absurd and will not infringe the rights of men.

The emancipation of women in Muslim countries in the form imagined by the State Department is impossible. In the West it has occurred because men wanted it. Would men in the eastern societies want this? French Le Monde is indignant that as soon as the dictatorship has collapsed and they began to demand democracy and respect for themselves, machismo quickly took all of the rights. According to French female journalists, in Tunis women who went to the streets to protest would often run up against a group of men that were shouting: "A woman's place is at home! A woman's place is in the kitchen!"

Therefore, the strategy of the western backers of Arab feminism is now the following: if they are beaten in the streets, "no one can silence them in cyberspace." There is an impressive worldwide network of sites, blogs and pages on social networking sites that showcase this thirst for freedom, the requirement of equality and the fear that everything will remain as before.

A video in which young Bahrainis, both girls and boys, require "equal rights" became known to the entire Internet community, as well as account SaoudiWomenRevolution on Twitter, where a twit appeared criticizing "mahrana," male guardianship over women in Saudi Arabia. This is not to mention numerous Facebook pages of women from Egypt, Tunisia and Yemen, blogs and discussion by women-lawyers resolution 1326 of the UN Security Council, which obliges countries to support all initiatives in favor of equality.

However, there are doubts about the extent of the availability of Internet resources in such countries, and whether the access to them would be restricted for women. At least, it is hard to imagine that a third of the Yemeni or Sudanese women, even theoretically, will be able to obtain such access. Therefore, American feminists are going to come to the problematic from their point of view areas in order to give local women an example of inspiration for the fight.

However, not all Muslim women are eager to welcome them. In the commentary for Pravda.ru an Algerian citizen Amina Sharabi said:

"In traditional Muslim families women do not need to be liberated the American way. Many do not see the main danger in the proposal of the feminists. The fact is that the bread winner is the husband, while his wife is behind him, like behind a stone wall, and she does not have to work. And they want to force Muslim women to work.

I am afraid that the true goal of feminists is deterioration of a Muslim family, which will invariably be accompanied by a decline in birth rate, reduced number of marriages, declining morality and principles, as well as inherent in Western civilization permissiveness and immorality".

Thus, the Western attempt to strike at the Arab-Muslim world through the destruction of traditional families today becomes clearly outlined. The question is, how effective it will be.