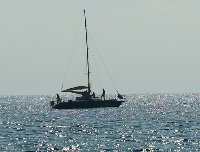 The Investigation Committee of the Russian Federation has launched investigation into mass poisoning of Russian tourists in the resort city of Bodrum, Turkey. Two Russian tourists, both females, have died as a result of serious poisoning, which was most likely caused with surrogate alcohol drinks. The females, aged 20 and 22, died after a party on board Orhan-5 boat.

The women were employed at Russian travel agencies. They arrived in Bodrum with other travel agents for a business trip. Marina Sheveleva, 22, became the first victim as she died at a hospital in Turkey's Antalya last Monday. On May 31, it became known that another Russian, Aigul Zalayeva, 19, died from poisoning in Antalya too. Tow other Russians, who also suffered from poisoning, remain hospitalized. The others have been discharged, Interfax reports.

The mass poisoning of Russian tourists occurred on May 27 at night, during a boat trip. The people - 20 tourists in total - were poisoned with methanol contained in surrogate alcohol drinks. They were tourists, travel agency managers, and Russian employees of local Turkish travel companies.

A friend of Marina Sheveleva, Anastasia Lavrenko, also attended the boat party, which became the last party in Marina's life. Anastasia was also hospitalized too, but was lucky to stay alive.

The girl said in an interview with Life News that she and Marina had been planning a trip to Turkey for two years. It was their first trip abroad. The girls were having a wonderful holiday indeed. The day before their departure, a tour guide offered the girls to go to a foam party on board a yacht. The ticket was only $50, and the girls happily agreed.

The girls were glad to find out during the party that their favorite drink - whiskey and cola - was available in the bar. They were happy to drink whiskey and cola because their hotel was only serving beer and gin and tonic. The girls were enjoying the company of three Russian young men. They were dancing and talking, taking alcohol drinks from the bar every now and then.

According to Anastasia, they all had about 10-12 glasses of cocktail. "It seemed to me sometimes that the taste of the alcohol was too strong. It was unusual, but I just thought that the bartender was giving us good portions of whiskey, so I just shrugged it off," Anastasia said.

The next morning, the girls returned to their hotel and went to sleep. They had to fly back home the following day. They woke up having a very strong hangover.

"I had the feeling as if I had drunk half of a bottle of a strong alcohol drink in the morning after the party. I could not walk straight and neither could Marina. I could not speak properly and could not remember a lot of what was happening the night before," Anastasia said.

The two friends thought that it was just a hangover, so they went to the airport in the evening. Marina was feeling terribly during the customs control. She could not even remove her sunglasses, when an officer asked her to. When on board the airplane, Marina began hallucinating.

Toxicologists say that a lethal dose of methanol for an adult makes up 30-100 ml. An intake of 5-10 ml results in poisoning, which may lead to blindness. The poisoning affects all internal organs, but kidneys suffer most.

Ethyl and methyl alcohols smell and taste alike. People may drink poison without being aware of lethal danger.